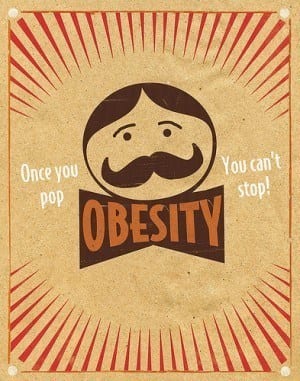 Obesity has officially been labeled as a disease. This means that more than 35% of Americans can define their excess body fat as: a disordered or incorrectly functioning organ, part, structure, or system of the body resulting from the effect of genetic or developmental errors, infection, poisons, nutritional deficiency or imbalance, toxicity, or unfavorable environmental factors; illness or sickness. That is the definition of a disease according to dictionary.com.

The American Medical Association voted recently to call obesity a disease, in hopes that it will help patients get better treatment and lessen the stigma associated with it.
“Recognizing obesity as a disease will help change the way the medical community tackles this complex issue that affects approximately 1 in 3 Americans,” said Dr. Patrice Harris, an AMA board member.
Obesity affects more than 35 percent of American adults and more than 17% of children in the United States. The South still has the highest amount of obese individuals and Mississippi has taken the title for being the “fattest state” three years in a row. Adults there have a 34.9 percent obesity rate.

With obesity now considered a disease, doctors will be forced to further look into it and possible underlying problems, instead of just glancing at it as a condition that the patient brought upon themselves.
Although obesity is a rapidly increasing epidemic in the United States, it shouldn’t be considered a disease. What you put into your mouth and how much physical activity you engage in is up to you and your responsibility. Yes, there may be some underlying issues as to what makes a person consume large amounts of calories and gain excess weight, but nowhere does obesity fall into the definition of a disease.

Heart disease, diabetes, and certain types of caner are all diseases that can arise in being obese. Obesity should not be seen as a disease, let alone one that leads to other ones.