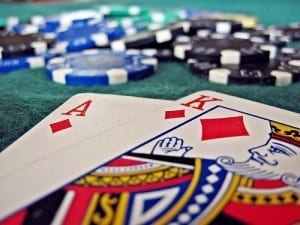 Archie Karas is facing charges of cheating and burglary.

Archie Karas, the self-proclaimed “King of Gamblers” has been accused by San Diego authorities of cheating in a game of blackjack. Karas was arrested on Friday in Las Vegas, on charges that he marked cards in a game occurring in July of this year.

The 60 year old, Anargyros Karabourniotos, (that’s Kara’s legal name) was arrested for allegedly marking cards at the Barona Casino in San Diego. According to authorities the cheating was caught on camera.

Karas has been accused of marking cards, a method of cheating in which the player marks cards as an indication of their value.

These allegations against Archie Karas have come as a shock due to the gambler’s famous reputation. Karas came to Las Vegas in 1992 with only $50 to his name. He turned that $50 into $40 million in three short years. Karas played pool then poker. When no one would play him anymore he resorted to betting on dice rolls.

In an interview in 2008 Archie Karas is called a “true gambler” by fellow gambler Tony Guoga, commonly known as Tony G.

However, Karas experienced losses along with the wins. His $40 million was lost in only a few weeks. In an interview with ESPN in 2008, Karas said, “I made it. I lost it. And as Frank Sinatra says, I stood tall and I took the punches and I did it my way.”

Karas is facing charges of cheating, burglary and winning by fraudulent means. He won $8,000 in the game of blackjack.