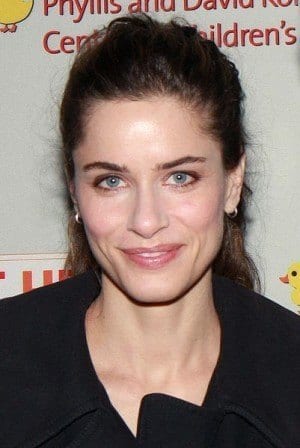 When asked how she would pitch the show, Amanda Peet described it to the Huffington Post as being “about a Type-A single mom, who’s a lawyer, who begrudgingly falls for her contractor who’s a motorcycle-riding, pot-smoking good-for-nothing. And it’s very sexy and romantic.”

When she’s not working on her own TV show, Amanda Peet admits that she watches plenty of other shows, including Game of Thrones, of which her husband, David Benioff, is executive producer.

The actress told TV Guide that they are planning to go to Ireland for the summer for the filming of Game of Thrones. She described herself as “a psychotic fan” and wishes she had  a role in the show. “I’ve been having sex with him for seven years…you’d think I’d get a role! I keep asking him, and he just looks at me and then changes the subject.”

The Huffington Post reported that Amand Peet has already gotten to see bits of the second season of Game of Thrones. “Well, that goes without saying! I’m like a coke addict for Game of Thrones. He’s like my druglord — when he brings home dailies, I’m like shaking in the corner.”

NBC will be airing all six episodes of Bent in just three weeks, with back-to-back episodes on Wednesday nights at 9 and 9:30 p.m. ET.