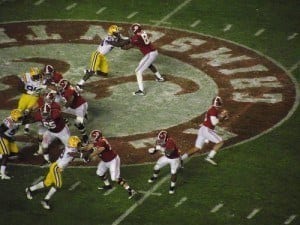 Alabama football crushed LSU 21-0 during Monday’s game and the Tide is still celebrating.

AP reports that thanks to Alabama’s stunning performance, they’ve risen to the top spot in the final Associated Press poll for the eighth time, tying Notre Dame for the most of any team in college football.

Alabama’s defense was in top form Monday night, keeping LSU from crossing midfield until there was only eight minutes left in the game. LSU finished with just 92 yards and five first downs.

“That was the message before the game: to finish,” coach Nick Saban said. “In fact, it was how bad do you want to finish? We certainly didn’t play a perfect game, we got a field goal blocked, we couldn’t find the end zone for a long time, but we just kept playing.”