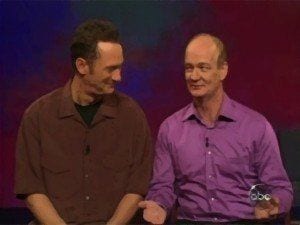 “Whose Line is it Anyway,” probably one of the best variety comedy shows ever to be on TV, returned to make a new generation laugh last night on the CW. And the premier did not disappoint.

The show is pretty much the same. “Whose Line is it Anyway” stars Ryan Stiles, Colin Mochrie, and Wayne Brady were as good as always. It was as if the show had never ended. They were just picking up where they left off. Fan-favorite games, like “Let’s Make a Date” and “Scenes from a Hat,” kept the nostalgia going and calmed the fears of long-time fans who were skeptical about the show’s reincarnation.

Of course there were some changes. The biggest was “Whose Line is it Anyway”s new host, Aisha Tyler. Tyler is no stranger to improv, having spent the last three years on “The Talk.” Sure, it’s a talk show, but with personalities like Sharon Osborne and Sheryl Underwood to deal with, improv plays a role Tyler’s hosting job description.

Tyler brings a lot that the original “Whose Line is it Anyway” was missing. Female comedians only made rare appearances in the original run. Tyler’s feminine energy plays well off of Stiles, Mochrie and Brady. She’s also much quicker with comebacks than  former host Drew Carey was.

But the changes weren’t all positive. Instead of a rotating fourth comedian, each new episode will have a guest actor. Guest actors did happen on the original “Whose Line is it Anyway,” but they didn’t come around all that often. When they did, they usually stole the show. (If you haven’t seen “Living Props” with Richard Simmons, check it out right now.)With the new format, the guests could become mundane and boring.

And if the guest fourth wasn’t enough, each episode will also have another guest actor who knows nothing about improv. While that does sound like fun, it runs the risk of the guest stars on “Whose Line is it Anyway” cancelling each other out. It also brings up the problem of less audience interaction. Random audience participants made the comedians work harder, and often ended with the actors breaking character.

The CW will air ten episodes of the new “Whose Line is it Anyway” over the course of the rest of the summer. If it does well, maybe it will be back next summer. Who knows?

So what did you think of the “Whose Line is it Anyway” premier?