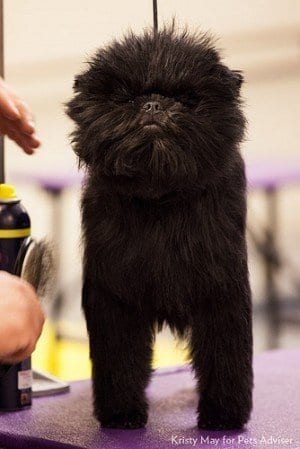 This year marked the 137th year for the Westminster Dog Show, and there were 2,721 entries in 187 breeds. Joe managed to stand above all the rest and is the first of his breed to win Best in Show.

Though Joe has lived with his handler in Pennsylvania for the past three years, his owner lives in the Netherlands, and he will return home with her after he walks his victory lap at the close of the Westminster Dog Show.

Joe is no stranger to winning shows, as this is his 86th Best in Show title and the last show he will participate in.

“He’s won a lot of big shows, but not like this one,” Lara said.

According to Lara, Joe carries himself like Mr. America.

“He doesn’t think he’s funny,” he said. “He doesn’t know his size or know that he has a pushed-in face.”

Another pooch got a chance to shine at the show, too. For the first time since 1925, the Westminster Dog Show named a Reserve Best in Show, a 20-month-old Old English Sheepdog named Swagger.

Swagger entered the Westminster Dog Show as a class dog, a category reserved for dogs who have not won any American Kennel Club championships but have won a major show. Swagger’s owner and handler Colton Johnson views his dog as an underdog because of his class dog status.

“When you come with a class dog, you’re just happy to be seen,” he said. “To win the group is astonishing.”

Many other dogs had their time in the limelight after winning in their groups, too. The Westminster Dog Show gives out awards in many categories.

[easy-social-share buttons="facebook,twitter,google,linkedin,stumbleupon,pinterest" counters=0 hide_names="force" fixedwidth="yes" fixedwidth_px="111"]
Previous ArticleWhy one is never too busy to get a College DegreeNext ArticleAffenpinscher, aka the world’s most obscure dog, wins best in show