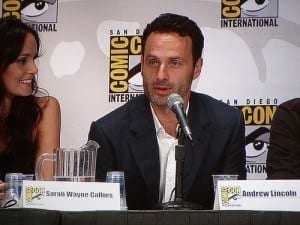 Walking Dead creators want to keep fans on the edge of their couch cushions, or so it seems after the last few minutes of last night’s episode. As life remained uncertain for Herschel, it was unclear if he was giving Lori a hug or eating her face.

Last night’s episode of The Walking Dead was ridden with questions of morality and blood spilling. Rick seems to be moving into an unstable psychological state, leaving him to question how far he will go to keep his group of survivors safe. Sure, it’s one thing to slash zombie after zombie every night, but those are still alive?

Sunday’s episode of The Walking Dead left Rick making some serious decisions, like to kill 3 of the prisoners found in the abandoned prison they now call home. After having the toughest of the prisoners, Thomas, pushes a zombie on top of him in the midst of a zombie battle (because he thought no one would notice?), Rick had no problem sending a blade into his skull.

In another scene, where after Thomas is killed, one of the prisoners runs away and Rick has to chase him through the prison. In a brisk decision to let him live or die, Rick decides to lock the door on the guy when he runs into a zombie-ridden courtyard. Despite these acts of intuition instead of morals, Rick has kept the group alive, including Herschel whose leg he chopped off. Although he did save him from turning into a walker, the loss of a leg could be as done as death. As Maggie says about their survival, “All we do is run.”

The last scene between Lori and Rick is a sad one, as Rick is obviously no longer a husband to her, but rather the leader of a group. She is a mother to a child she can’t seem to handle, a pregnant woman who is in the wrong setting to be giving birth on all accounts and a wife to an emotionally detached man. Rick may be able to save the group through his instincts, but he has lost his sense of humanity when it comes to his wife.

Next week, The Walking Dead fans will see the long awaited Governor, which is sure to add tension as Rick has been the leader for some time.

The Walking Dead airs on Sundays on AMC.