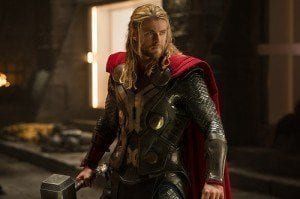 Thor: The Dark World begins with a bit of exposition from the All-Father himself, Odin (Anthony Hopkins.) Long story short, way back when, the evil Malekith and his dark elves waged their war to destroy the universe because, darkness. But he fails and his universe-destroying weapon the Aether is hidden by Asgard.

In the present we meet up with Thor and pals as they try to bring peace to the nine realms by smashing things with hammers and swords. Loki is imprisoned in Asgard for his (HIGHLY uncharacteristic) crimes against Earth in The Avengers, and Jane Foster (Natalie Portman) is still doe-eyed and fawning over her mighty goldilocks man whom she has not heard from in two years. Due to a cosmic event among the realms, Jane stumbles upon the Aether and is infected by it. This of course summons Malekith and his cronies to bring trouble to Asgard, and later Earth.

After getting righteously smacked down by Malekith, Odin pretty much closes off Asgard and forbids Thor from pursuing the dark elves. So Thor respects his father and does nothing, and the movie ends. Ok, no; not that. Thor and co. enlist the snakely Loki to help them escape and take on the dark elves to save the universe because, heroism.

Thor: The Dark World has a lot of problems that The Avengers did; namely the plot’s inherent vagueness. The conflict Thor faces seems like one rehashed in dozens of movies of this kind, leading to “high stakes” that never really feel that high. The villain Malekith is so damn boring, and his motivations are pretty much non-existent. The believability of Loki as villain in Thor was that we saw and understood why he became a jaded villain.

An equal strength and weakness of Thor: The Dark World is its humor. The “fish out of water” premise is what gave Chris Hemsworth his likability in Thor, but most of that charm of the character is gone in the sequel. Instead most of the laughs in the film are intended to derive from Kat Dennings’ goofy hipster or Stellan Skarsgård’s overly wacky Dr. Selvig. Another series of humorous plot points comes in the form of wormholes which transport characters across the realms with no warning at all. It’s a plot device that is smart, but you can tell the creators are holding back a bit with their imagination.

Tom Hiddleston unsurprisingly steals the show in Thor: The Dark World. The man has got a hang of this character’s ticks and clearly takes great pleasure in playing him in any given scene. The talented Idris Elba gets more face-time as the all-seeing Heimdall, which is nice; while Lost alum Adewale Akinnuoye-Agbaje is hardly in the film at all before he gets turned into an faceless hulked-out warrior, which is less nice. And like last time, Natalie Portman’s character is pretty much a set piece in the film. The sequel’s script doesn’t do her any favors either by making her not much more than a damsel in distress.

Thor: The Dark World is a predictable superhero movie where a lot happens, but not really a lot actually happens. Chess pieces are moved around a bit, but they are kind of just put back in their starting positions by the film’s end. More than likely to make the next sequel/crossover/$$$$$ that much easier to craft.