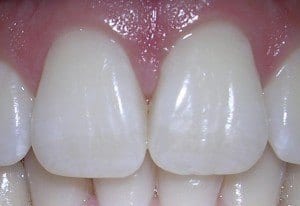 “Tinkle Teeth” could become all the rage

Teeth have been grown by scientists from human urine.

Not just from pee on its own, but the results published in Cell Regeneration Journal showed how stem cells from urine have been used to grow rudimentary teeth, or tiny tooth-like structures, in a process developed by scientists from China.

It’s worth mentioning too, that stem cells from urine are much less controversial than their counterparts from human embryos.

The scientists at the Guangzhou Institutes of Biomedicine and Health hope the technique could be used to replace teeth lost to age and poor dental hygiene.

Stem cells, being the unassigned cells that can grow into any type of tissue, are a popular area of research. The group used urine as a starting point, because cells normally passed from the body, namely those from the lining of its excretory system, are gathered in the laboratory. The cells collected are then coaxed into becoming stem cells.

A mix of these cells and other material from a mouse was implanted into the animals.

The scientists said that after three weeks the bundle of cells started to resemble a tooth, and contained dental pulp, dentin, enamel space and enamel organ.

However, the “teeth” were not as hard as natural teeth.

This piece of research won’t immediately lead to new dental options, but the researchers say it could lead to further studies towards “the final dream of total regeneration of human teeth for clinical therapy.”

The process faces many challenges: to start with, Prof. Chris Mason, a stem cell scientist at University College London, told the BBC that urine was a bad place to start.

“It is probably one of the worst sources, there are very few cells in the first place and the efficiency of turning them into stem cells is very low. You just wouldn’t do it in this way.”

“The big challenge here is the teeth have got a pulp with nerve and blood vessels which have to make sure they integrate to get permanent teeth,” Mason added.

Mason also warned that the risk of contamination, through bacteria for example, was much higher than with other sources of cells. Additionally, in its current form the practice only has a 30 percent success rate.