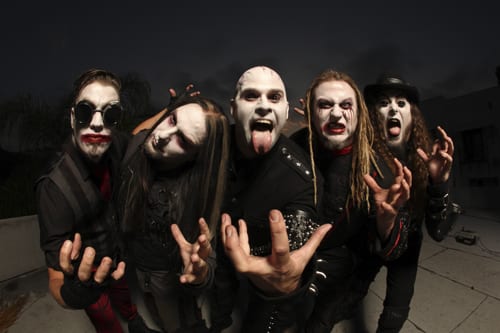 Sunflower Dead gets weird and hit the road this October, featuring their new album “It’s Time to Get Weird”.

College News got a chance to catch up with Sunflower Dead’s lead, Michael Del Pizzo, after his long summer tour with Avatar, promoting the release of their new single, also called “It’s Time to get Weird”. The song is super-fun and sets a precedence for the rest of the album; one that is sure to get your attention.

A rock band from Long Beach, CA, Sunflower Dead is a group that has progressed by developing a theatric identity, reminding us of why the fans are so important.

“We learned who we are from touring the U.S… we started performing, having fun and smiling and the fans started smiling back. So we were like—maybe the tough guy thing really isn’t us.”—Del Pizzo

Formed of Jamie Teissere of the band Droid, Michael Del Pizzo and Leighton Kearns of Memento, this collaboration of talent and music is only the spark of a creative platform for Sunflower Dead. Michael Del Pizzo is very much involved in the literary context of his music as well as the artistic, leading Sunflower Dead into the world of music, art and literature.

“We are leading our fans into this feel of the comic book world… we are trying to lead people down that road and associate ourselves with the world of comics, animations and Sunflower Dead.”—Del Pizzo

Now with the arrival of their new album “It’s Time to Get Weird”, Del Pizzo and the crew set out for Dayton, Ohio, ending their tour date on Devils night in Detroit Rock city, at St. Andrew’s Halls on Sunday, Oct. 30, 2016. Make sure to check out their new album and catch one of these shows along the way.

College News: What was your inspiration for stepping into the role of a larger than life musician?
Michael Del Pizzo: It basically came from the idea that we wanted to have some fun for a change! The guys in the band wanted to do something that was more than just your regular jeans and T-shirt kind of band. We figured, why not! It seemed like a good time in music and it’s just about entertaining people at the end of the day. Why not just give people an escape for an hour when we play?

CN: What is the biggest difference between “It’s Time to get Weird” and your last album “Evil Seed”?
M.D.P: Well, we progressed a lot since 2012.  We learned who we are from touring the U.S. Some of our first performances were a little more agro and a little more aggressive, like, you know—tougher. Then we started performing and having fun and smiling and the fans started smiling back. So we were like—maybe the tough guy thing really isn’t us! When that started happening, the whole “Let’s Get weird” thing started happening, which lead to the whole statement “It’s Time to Get Weird”. That lead to the album title and now the single. So it was something that grew over two years of touring the country.

CN: The album art done by Scott MonsterMan Jackson looks like a dead zombiefied version of the band Kiss. What can you tell me about it?
M.D.P: Yeah! Exactly! You know what’s funny about that cover is, originally he painted a picture of us, like, bleeding thousands of evil seeds into the world. At first he didn’t like it and then we didn’t like it, so he was like—give me a week, I’ll paint something else—and what he came back with was super cool! We loved it!

CN: Who did the animation for the official “It’s Time to Get Weird” music video, featuring Jonathan Davis of Korn?
M.D.P: That was done by Steven Seivers and his team at Smorgasbord Productions. I got together with them, told them my ideas and they wrote out the treatment for the video. They took the treatment and just went to town with it. They are just an amazing group of animators who really understand how to get things across, how to tell a story, how to make it comical and still a little twisted. We had a great time—they just really knocked it out of the park! It’s kind of like with my first video “Dance with Death”; you see that comic book theme because lately, what we are doing is we are leading our fans into this feel of the comic book world. Right now, I’m writing a graphic novel—“The Sunflower Dead”—and that will come out in a year or two. So we are trying to lead people down that road and associate ourselves with the world of comics, animations and Sunflower Dead.

CN: So you are writing a graphic novel and working with a nefarious theme core author, to be announced at next year’s Comic con! What can you tell me about that?
M.D.P: Well it’s going to be really cool! It’s going to be me, him and his people getting together—probably after our next tour. The story of “The Sunflower Dead” is fleshed out. We are basically going to come up with things that are gruesome and kind of pop. It’s going to be a 60-page graphic novel. If we can get it done by next year—great! If not, then the following year. We will debut it at Comic con, get it published and let it go! It will be something completely separate of the band because it won’t have anything to do with the music. I originally wrote the story for “The Sunflower Dead” before there was a band. Now, it’s because of the band I’m able to do this graphic novel.

CN: What do you want your fans to know about you?
M.D.P: I always tell them that I’m hungry, so come and bring me food, but they already know that. But you know, I’m a very down to earth person. Anything that is onstage is a performance, but offstage I’m very shy. I like to have my own time to myself and take it slow when I’m not on stage! I like to spend time with my family and girlfriend and relax a little bit.

ICYMI: Clutch with Lamb of God at the Rock N Derby