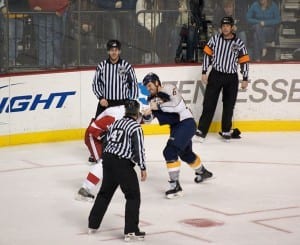 The NHL’s Department of Play Safety announced today that it will fine Shea Weber. The Nashville Predator, Weber, slammed Detroit Red Wing Henrik Zetterberg’s head against the glass at the end of Nashville’s 3-2 victory. The punishment is set at a $2500 fine and some Detroit fans say that’s not enough calling for the suspension of the player. See for yourself in the video below.

“We felt this was a reckless and reactionary play on which Weber threw a glancing punch and then shoved Zetterberg’s head into the glass,” said Brendan Shanahan, NHL Senior Vice President of Player Safety and Hockey Operations. “We reached out to Detroit following the game and were informed that Zetterberg did not suffer an apparent injury and should be in the lineup for Game 2.”

The cheap shot was reckless and is Shea Weber’s second fine this season, “This play and the fine that addressed it will be significant factors in assessing any incidents involving Shea Weber throughout the remainder of the playoffs.”

I will say paying $2,500 is .00003 percent of Shea Weber’s NHL salary but even yours truly is a Detroit fan, and to me, the hit doesn’t look all-that damaging, not to mention this is hockey people.

“It’s quick game, things happen, and it’s an emotional game,” Weber said. “I’m thankful he’s (Zetterberg) is not hurt and we can move on.” The media attention of the cheap shot is sure to make for an interesting game come Friday.

See the video of Shea Weber’s hit on Henrik Zetterberg below: