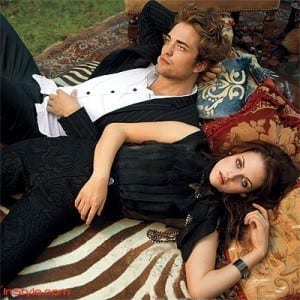 Robert Pattinson has reportedly forgiven Kristen Stewart for her infidelity

Robert Pattinson and Kristen Stewart are reportedly back together after Kristen Stewart’s highly publicized infidelity with Snow White and the Huntsman director Rupert Sanders. Sources say the couple have had a heart-to-heart and have made up — just in time for the premiere of Twilight: Breaking Dawn Part 2.

Robert Pattinson and Kristen Stewart had a conversation over the weekend during, which Pattinson forgave Stewart for her “stupid mistake” of cheating on him with the married 41-year-old director, a source told The Sun. The couple has decided that they “can’t live without one another,” and Kristen Stewart has said that “she’s really looking forward to being at the last Twilight movie premiere” with Pattinson, according to the source.

“After a few tearful talks, they’ve worked it out,” the source continued. “Rob can see how truly sorry Kristen is and has totally forgiven her. They really do love each other.”

Despite the fact that the couple moved out of their Los Angeles home and took up separate residences, rumors now circulate that the two are back to cohabiting in L.A. at a residence close by the Brangelina roost.

Now, the speculation centers on whether the reconciliation of Robert Pattinson and Kristen Stewart is real or just a publicity stunt. What do you think? Is this a bona fide reunion, or are RPatz and KStew just hamming it for the camera crew at the Twilight premiere?