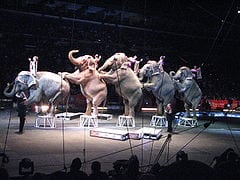 The parent company of Ringling Bros. and Barnum & Bailey Circus is not admitting any wrong doing but will pay a $270,000 civil penalty, the largest ever put on an exhibitor under the federal Animal Welfare Act. Feld Entertainment has long been criticized by animal activists for its treatment of elephants.

According to MSNBC.com, Department of Agriculture Secretary Tom Vilsack said in a statement, “This settlement sends a direct message to the public and to those who exhibit animals that USDA will take all necessary steps to protect animals regulated under the Animal Welfare Act. The civil penalty and other stipulations in the settlement agreement will promote a better understanding of the rights and responsibilities of all exhibitors in maintaining and caring for animals under their care.”

The settlement follows several years of federal inspections that discovered what inspectors said were violations of the law, especially regarding how Ringling’s 54 elephants were treated.

The Associated Press cited one inspection that said a 35-year-old Asian elephant was forced to perform despite a diagnosis of sand colic and apparent abdominal discomfort. Circus officials told the inspectors that separating her from the other performing elephants would have been even more distressing to her, MSNBC reports.

Feld Entertainment stated that it stands behind its staff and that it “decided it was more important to focus on the future of its business by continuing to provide the best animal care possible instead of engaging in costly and protracted litigation.”

Noted Feld spokesman Steve Payne said that Feld is countersuing, alleging that the plaintiffs and their lawyers were in a “conspiracy to pay a witness for his testimony.”