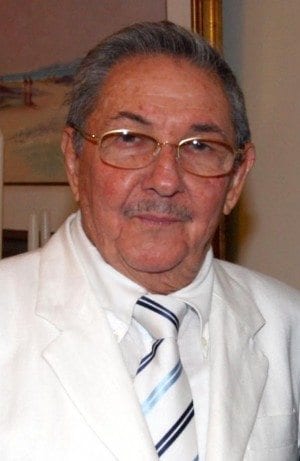 Castro: “If they want confrontation, it’s better settled in baseball.”

Raul Castro, President of the island nation of Cuba, said Thursday at the end of the Revolution Day ceremony that his government is willing to sit down for talks with the United States government, as long as the conversation is between equals.

Raul Castro, who succeeded his older brother Fidel as President of Cuba, grabbed the microphone at the Revolution Day ceremony came to a close and echoed statements he had made prior, saying no topic is off-limits, including U.S. concerns about democracy, freedom of the press and human rights.

“Any day they want, the table is set. This has already been said through diplomatic channels,” Raul Castro stated. “If they want to talk, we will talk.”

Castro added that the U.S. would have to be prepared to hear Cuban complaints about the same issues within the U.S. and Europe.

“We are nobody’s colony, nobody’s puppet,” Castro said of his nation.

There has not been diplomatic relations between Castro’s Cuba and the U.S. for over five decades. The 1959 Revolution spurred fears within the U.S. of the influx of socialism just 90 miles from the American coast.

The 50-year-old U.S. embargo prohibits nearly all trade and travel to the island. The U.S. government insists it will not lift the embargo until Raul Castro and his administration address human rights violations within Cuba and institute democratic reforms.

According to CBS News’ Portia Siegelbaum, Raul Castro spoke of the U.S. allegations of human rights violations in Cuba during his speech, accusing the U.S. and its European allies of “inventing” the issue of human rights.

The U.S. presence at Guantanamo Bay proves to be a sticking point for Raul Castro and his regime, who have demanded the base be shut down and have accused the U.S. of torturing suspects held within the military prison.

“We will continue to fight such a flagrant violation. […] Never, under any circumstance, will we stop trying to recover that piece of ground,” first Vice President Jose Ramon Machado Ventura said during the Revolution Day ceremony keynote address.

According to Granma, the official newspaper of the Communist party, Raul Castro warned “this is a peaceful island that likes to dance and make friends with everyone including the United States. Still it is a stubborn country. If they want confrontation, it’s better settled in baseball, where we win some and lose some. On other occasions we never lose.”