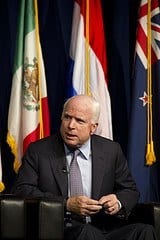 Eight Senators released a proposal on Monday to introduce immigration reform to Congress, but the President has his own ideas as well

Immigration reform has long been a divisive economic and moral issue with the American public. But the subject is now a hot topic in Washington, D.C., as President Obama disclosed his immigration plan in a speech Tuesday amidst discussion in the Senate about an alternate bi-partisan proposal.

“I’m here today because the time has come for common sense, comprehensive immigration reform,” Obama said during a speech Tuesday. “Now’s the time…we need Congress to act on a comprehensive approach that finally deals with the 11 million undocumented immigrants who are in this country right now.”

A group of four Republican and four Democratic senators—the self-titled “Group of Eight”—released a proposal on Monday that outlined a plan for immigration reform that they believe can pass through Congress. The plan includes a path to citizenship for illegal immigrants, a streamlined legal immigration system, and more emphasis on border security.

Specific details about the senators’ proposal are scarce, but Obama indicated that he is encouraged by the progress.

“The good news is that, for first time in many years, Republicans and Democrats seem ready to tackle this problem together,” he said.

Obama indicated that he would push his own immigration proposal into Congress if lawmakers fail to pass their own reform bill soon. His plan is similar to the “Gang of Eight” proposal, but contains more liberal tendencies such as requiring gay couples to be treated the same as heterosexual couples under immigration law. Obama’s plan also calls for an easier path to citizenship right away, while the Senate’s proposal requires border security to be tightened before illegal immigrants could become citizens.

“It won’t be a quick process, but it will be a fair process,” he said. “And it will lift these individuals out of the shadows, and give them a chance to earn their way to a green card and eventually to citizenship.”

Many Republicans are wary of the President’s progressive plan and prefer the more conservative proposal being developed in the Senate. Brendan Buck, a spokesman for House Speaker John Boehner (R-OH), said Obama runs the risk of reversing the progress already in the Senate made by offering a new proposal.

“Any solution should be a bipartisan one, and we hope the President is careful not to drag the debate to the left and ultimately disrupt the difficult work that is ahead in the House and Senate,” he said.