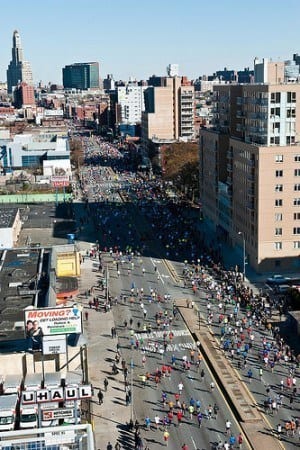 The city expects 47,000 runners not even a week after Hurricane Sandy comes through

The NYC Marathon is set to take place in New York City this Sunday amid speculation that the event will be too much for the city to handle in wake of the Hurricane Sandy destruction. Mayor Michael Bloomberg, however, says the marathon will be a positive for the city.

“It’s a great event for New York and for those who were lost, you have to believe they would want to economy and city to go forward for those left behind,” Bloomberg said of the upcoming NYC Marathon.

The New York Road Runners President, Mary Wittenberg, agrees with Mayor Bloomberg’s decision to hold the NYC Marathon. Wittenberg says runners from around the world intend to run in the race in New York City and that the event could be an opportunity to raise funds and gather volunteers to help with relief programs for the devastation from Hurricane Sandy.

On the other hand, many are criticizing the decision, saying the city is not ready yet and resources should be focused on aid efforts as opposed to the NYC Marathon. With widespread power outages, less than half of the city’s subway system up and running, and flooding in various parts of the city, specifically downtown garages and streets, many have dropped out, claiming the city can’t bounce back from a natural disaster in only a few days. A “Cancel the 2012 NYC Marathon” Facebook page was created Wednesday.

The city obviously has to adapt to current situations for the NYC Marathon. The opening ceremony that was set to take place on Friday and other events have been canceled and organizers are seeking transportation from private companies for the runners.

Mary Wittenberg says overall that the NYC Marathon is a symbol of the perseverance of the city and the people of New York.

“To us the marathon really epitomizes the spirit of New York City, the vitality, the tenacity, the determination of New Yorkers,” Wittenberg said of the NYC Marathon and its larger impact. “Now our every effort is to once again tell the world that New York City, as the mayor would say, is open for business, and we welcome the support of the world at this trying time.”