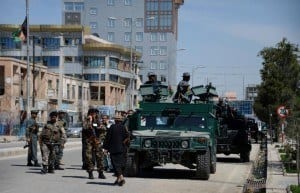 Suicide Bombings and Raids in Afghanistan

Siege of Court Compound in Mazar-i-Sharif

On Thursday, Taliban forces disguised as military personnel assaulted a court complex in northern Afghanistan. The attack took place in the usually uneventful town of Mazar-i-Sharif.

At least 10 people died as a 6 hour gunfight with Afghan security forces ensued. There were also reportedly dozens of wounded people.

One building in the court complex was set ablaze when the Taliban threw in grenades.
The battle started when four Taliban, dressed in military uniforms breached the main entrance and begun firing on individuals, according to Abdul Raziq Qaderi the acting provincial police chief of Balkh province.

He also stated that five Afghan security personnel and five civilians were killed along with 66 police, prosecutors, court staff, women and children wounded

‘Green on Blue Attack’ in Jalalabad

Just a day before the Taliban assault in Mazar-i-Sharif, there was an insider attack when an Afghan National Army soldier opened fire on Coalition troops leaving a compound. There were one US dead as well as other casualties including the attacker.

The incident took place in Jalalabad, the capital of Nangarhar province.

The Taliban had not claimed credit for this attack but it has been known that the Afghan National Army occasionally reveals infiltration by the Taliban.

Last Sunday Afghani MP Gul Pacha Majidi was wounded in a suicide attack that killed three people as the MP was leaving a meeting with Afghan elders.

The Taliban had also not declared that it was involved in this incident, yet the cases of suicide attacks have mounted regardless.

On Thursday morning 17 people were killed and 40 wounded, according to the interior ministry of Kabul, during a rally in the city of Khost.

Among those wounded was Humayoun Humayoun, a MP representing Khost province.