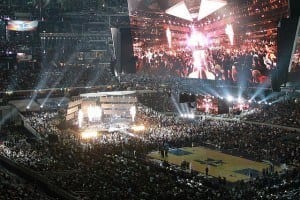 If a decision is not reached by Monday, regular season games could be in jeopardy

It is no surprise that the NBA is currently in a lockout. The players and the owners are having a hard time sitting down and coming to an agreement. This lockout that started in July is due to the fact that the owners and the players cannot create a new collective bargaining agreement.

The league is complaining about the player’s salaries being too high and them suffering losses to due to this. The players are upset because they believe the league has more money than they are owning up to. In addition to financial fights, the owners and players also cannot agree on a proper age for players entering the league.

Meanwhile, as we reported earlier, some players are looking into playing overseas, or have taken on second jobs for <a data-cke-saved-href=”https://www.collegenews.com/index.php?/article/delonte_west_13932/” href=”https://www.collegenews.com/index.php?/article/delonte_west_13932/” title=”revenue” target=”_blank>revenue</a>.</p> <p>Against the cries of fans, the complete pre-season has been canceled and now the first two weeks of the regular season games might be following suit.</p> <p>Despite several meeting between the two, little progress has been made. </p> <p>This is the third major work block in NBA history.</p> <p>To stay updated with the lockout: <a data-cke-saved-href=” http:=”” espn.go.com=”” nba=”” topics=”” _=”” page=”” nba-labor-negotiations”=””>click here