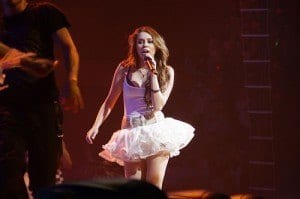 Miley Cyrus is really trying to gain her spot on the Twerk Team. After performing at last night’s MTV VMA’s. Miley Cyrus has reached the top of the blogs with her latest booty shaking antics. This year’s MTV Video Music Awards were packed with surprises featuring the triumphant return of every mid 20- year-old’s childhood memory of boy band, N’SYNC. Lady Gaga, Kanye West, and Drake also had memorable performances plus a much awaited appearance by Daft Punk who premiered a clip for their music video “Lose Yourself to Dance” with collaborator and friends Pharrel and Nile Rodgers.

Alas, even after all of that interesting fanfare of the night, nothing compares to how Miley Cyrus stole the show, but not really in a good way. After hearing that she would be performing at the VMA’s, I knew that some twerking would be involved and maybe some other raunchy dance moves, but I had no idea that a feeling of embarrassment would creep into my stomach while watching this performance.

Complete with her tongue hanging out half of the performance like a dehydrated pooch, Miley came out in a plush onesie and proceeded to awkwardly try to do what I think were suppose to be sexy dance moves. Soon her single “We Can’t Stop” began and things got even more uncomfortable when she began to spank a very large bottomed woman multiple times. The fact that her vocals were extremely pitchy and unbearable, were neither here nor there, because things got even odder when Robin Thicke came out dressed like a fancy Beetlejuice and Miley Cyrus stripped down to a nude colored panty set.

Miley Cyrus then tried to assault an innocent foam finger and bent over and grinded on Robin Thicke. Audience reactions from Rihanna and Will Smith’s family were golden, and the instant Twitter reactions were even more hilarious. Comedian Bill Maher tweeted out “Haven’t been in a strip club in a while, but glad to see nothing has changed.” Actor James Van Der Beek was disturbed by the foam finger. “Things I learned watching the #VMAs2013: There’s nothing you can do with a foam finger that you can’t air on MTV.”

Producer Mike WiLL Made It, who is responsible for Miley’s first twerk anthem, Juicy J’s “Bandz A Make Her Dance” went by a radio station this past week to play a snippet of Miley’s rap debut on “23” which also features Juicy J and Wiz Khalifa. In the song the hook features Miley saying “I’m in the club, high off purp with some shades on/ Tatted up, miniskirt with my J’s on.”

The VMA performance was just the beginning of Miley’s newfound attitude and something tells me we are only going to see more of this to come. Check out the video and let us know what you think! http://www.mtv.com/videos/misc/942064/we-cant-stop-blurred-lines-give-it-2-u-medley.jhtml#id=1712596