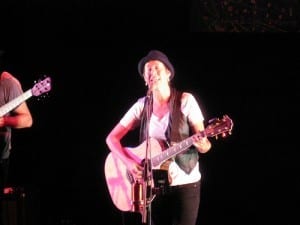 The once openly gay artist opposes gay marriage at her San Francisco concert.

Michelle Shocked, a well known controversial artist, gave her fans an earful of homophobia during her concert at Yoshi’s, in San Francisco on Sunday. The born-again christian, former left-wing lesbian, stated her stance on gay marriage and predicted the return of Jesus saying:

“When they stop Prop 8 and force priests at gunpoint to marry gays, it will be the downfall of civilization, and Jesus will come back.”
As some fans were offended and started to leave, Michelle Shocked let them know that she knew they’d take their arguments to social media saying:

She was right. Not only did the owner of Yoshi’s, an openly gay man, stop the show mid-set and ask Michelle Shocked to leave the stage, the audience also verbally retaliated and later took to Twitter. Many of the tweets posted were in favor of gay marriage and accusing Michelle Shocked of being a hypocrite.

The once openly gay artist, now “born-again christian”, is said to be dealing with an inner struggle of acceptance. Many gay advocates are reaching out to the promoters of her future shows and having them cancelled. The promoters of SPACE, a venue in Evanston, Il, reached out to their followers on Facebook saying:

“Many of you have reached out already following an ugly rant given by Michelle Shocked at her show in San Francisco last night. After speaking with the promoter of that show about the nature of the remarks, it’s clear that this is no longer a show we’re willing to put our name on. The May 5th performance at SPACE has been cancelled and refunds will be issued at point of purchase.”

Fans who attended the San Francisco show say they are still fans of Michelle Shocked, but her hate speech was unacceptable and unfair to the audience who paid to see her perform her 80s and 90s hits, not to support prop 8, California’s legal definition of marriage being between a man and a woman.