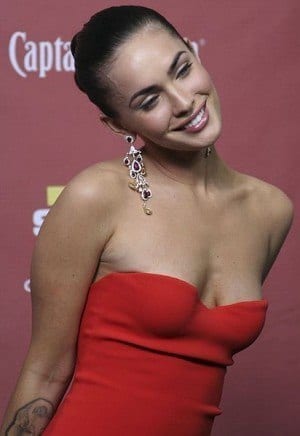 The sexy actress is expecting a girl

It has been confirmed, after much speculation, uber-babe Megan Fox is pregnant with her first child. The sex of the child has been revealed too. The Transformers star and Brian Austin Green will be having a girl!

This will be Fox’s first child, but she is already a step-mother to Green’s 10-year-old son, Kassius. Showbizspy quoted a source stating, “She’s been helping to raise Brian’s 10-year-old son Kassius for years, and now she’ll have the experience of being mommy to a little girl.”

Fox told W magazine back in 2010, “No one believes me when I talk about this but I’m really maternal…I worry that because I’ve always wanted kids so much, as the world goes sometimes, I won’t be able to have them, even though I would be able to provide them with such an amazing environment.”

Fox was spotted in Los Feliz, a neighborhood in Los Angeles, taking a stroll while placing her hands on her stomach.

According to an unknown source Fox is to be “due at the very end of September or the first week in October…Megan is attached to a movie called ‘Swindle,’ but it’s in rewrites and probably won’t even begin filming until next year. So right now her plate is totally clean, and she can devote herself to her baby.”