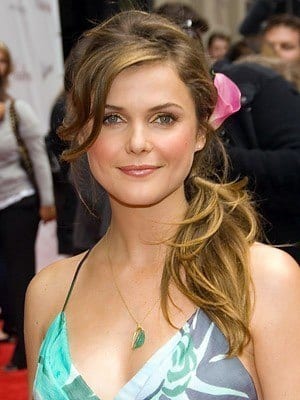 Keri Russell, our once beloved Felicity star, is back on TV again in the new spy drama The Americans.  Out with the fragile angel that is Felicity Porter, doe eyed and bushy tailed running around New York City in search of meaning. In with the cold KGB spy who has been masquerading as an American suburban family with fellow KGB spy and arranged husband Matthew Rhys.  Keri Russell is really continuing in her daring deviation from her college drama days, coming off a movie stint that includes Waitress, Mission: Impossible III and Sundance participant Austenland.

Similar to the double role the characters of Keri Russell and her husband had to endure daily as sleeper agents, the acting challenge for both actos in Americans was also no small feat.  The plot takes us back and forth between ‘80s suburban America and ‘60’s Soviet Moscow, not to mention the double layer of truths that is their own marital relationship.  Keri Russell brings her acting expertise to portray a cold, detached spy unswervingly dedicated to her mission.

Americans is being touted as a period piece by FX, making most young to middle-agers grind their teeth in indignation.  Keri Russell herself talked about the interesting categorization of her latest show.  “I can’t believe the ’80s are already period. The biggest thing is no cellphones, which is sort of great because everything is so gadgety these days. When we go to intercept a message we have to drive by our drop spot — like, we’re looking under rocks for messages.”  Calm down Generation X.

The new show will premiere on January 30th. Za zdorovye!