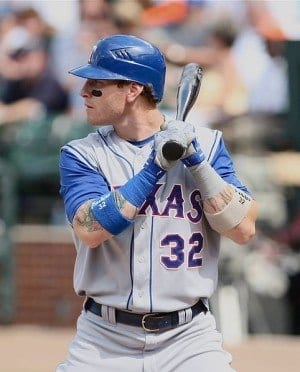 Josh Hamilton currently has 17 home runs, four of which happened in the same game. His closest competition, Matt Kemp and Carlos Beltran, are five behind.

Now, the bat Josh Hamilton used for eight of his nine home runs last week is headed for the Hall of Fame. The Rangers outfielder agreed to donate it to Cooperstown after he hit four home runs with it Tuesday night in Baltimore. He continued using the bat until the seventh inning of the Rangers’ 13-3 victory against the Los Angeles Angels Sunday night when the bat broke on his 44th run of the season.

“She died a hero. She was tired, she was getting as little weak,” Josh Hamilton said, with a smile.

Josh Hamilton started his home run streak on Monday night, hit four homers on Tuesday and went on to hit three more in the first two games of the Angels series in Texas. MLB authenticated the bat with a sticker after Tuesday’s game when he became the 16th player in big-league history to hit four homers in one game. On Sunday he started out using a pink bat for Mother’s Day and breast cancer awareness but switched to the now famous bat in the seventh.

The soon-to-be free agent is no doubt talented, but he’s also a bit of a liability. While in the Tampa Bay organization, he was suspended for more than three years for drug and alcohol abuse. He missed the entire 2003-05 seasons, returning late in ’06.

Josh Hamilton says he has been sober since October 2005 at the request of his grandma. He has had two alcohol-related relapses in the past three years. Hamilton is tested for drug use three times a week, and there has never been an indication of a positive result.