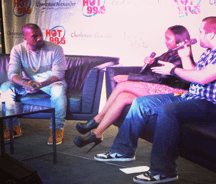 Internships are the stepping stones to success

Recent surveys indicate that approximately  70% of the workforce  reported   unhappiness with their jobs.  Going to work and doing a job that you don’t like is a lousy way to go through life.

I grew up playing sports like hockey, football, and baseball. I played until my late teens and was fortunate enough to be on a high school football team that played for a state championship. For most of us formal participation in team sports comes to an end whether we are ready or not.

Still, after graduating from high school I had this faint idea of playing sports at Augsburg College a D- III school in Minneapolis, Minnesota.   The tough thing for me was the realization that schoolboy sports were over, and it was time to move on to other pursuits.

Just browsing the net I came upon several internship opportunities, all unpaid. I figured that if I was going to work for no pay, then it had to be an internship that at least was interesting.  Then I came across an unpaid internship for the morning show on KDWB. Since forever I have listened to KDWB, which is the most popular top 40 station in the Minneapolis/St. Paul area.  The internship was with the Dave Ryan in the Morning show.  I really wanted the opportunity to work with Dave Ryan, so I applied on-line for the KDWB internship.

I asked my Dad for advice and he made the suggestion that I, above all, be polite in all my communications with KDWB, but that I also should be persistent. Every other day I either sent an email or made a phone call to the station leaving the message that I was very interested in the internship and wanted the opportunity to work with the Dave Ryan in the Morning Show.  Again, I was persistent, but I was always very  polite.

A few weeks later I got a call back and had an interview with Steve O, a producer and co-host of the KDWB morning show.   From my perspective the interview went great, and I was hired as an unpaid intern.

The more I worked at the station the more  I realized the potential of the opportunity, because  it was giving me the chance to prove myself,  and I was doing work that I truly was beginning  to enjoy.   I was very eager to learn all that I could and never worried about putting in extra hours. I remembered a quote from a business consultant who said “always do more than expected”.  So I also volunteered to go way beyond what was expected of an unpaid intern, including learning to run the control boards, helping with live events, and setting up overnight broadcasts.

During my first week at the station, on my own initiative, I made “Intern John” baseball cards. I passed out my “Intern John” cards at live events to get my name out.   The more I got into radio work, the more I really enjoyed it.

I also   took advantage of every chance to join in the on-air conversation during the Dave Ryan Morning Show, and it was fun!   I was eager to get as much airtime as possible, so later I volunteered to DJ by myself, starting at 4:30 AM and working until the morning crew members started at 6:00 AM.   My radio name “Intern John” was starting to get some recognition in the Twin Cities.

I think because I always demonstrated ambition and a willingness to learn, the on-air personalities on the show,  Dave Ryan , Steve O, Lena Svenson, and Crisco, took time to teach, mentor,  and work with me. Along the way I developed close friendships with all of them, which later became important in my career progress.

I also got to meet and work with other on-air personalities at the station, like Lucas and “Big D”.  I got the opportunity to travel with “Big D” to live KDWB events that he was hosting at clubs and other venues.  I learned a lot from working with both Lucas and “Big D”. These experiences were not only great learning opportunities but fun as well. “Big D” became a very close friend and mentor.

Again, during my first year at KDWB I was an unpaid intern. I was also a full time college student and worked as many hours as I could in the college bookstore. Juggling classes, class assignments, work hours at the college bookstore and KDWB was a heck of a challenge. It was hard but I made it all work.

At the start of my 2nd year as an intern at KDWB, Dave Ryan asked for a meeting with me. Many thoughts raced through my head and not all of them good, as I thought about that upcoming meeting.  The meeting with Dave Ryan went great, and he informed me that going forward my internship at KDWB would be paid.  That was the very first time in my life that I actually was going to get paid for something that I really loved doing, proving once again that hard work, dedication to learning, and perseverance can pay off!

So from my sophomore to my senior year in college, I worked on the morning show at KDWB as a paid employee.  During that time I also worked at KAUG, the Augsburg College radio station, as the Program Director.  Working at KAUG provided even more learning opportunities, like planning and hosting campus events, concerts and developing on air programming.   In my senior year I became president of the campus radio station.  It was great to be able to use the experience I gained at KDWB, a market 16 radio station, at my college’s radio station.

By the time I graduated from Augsburg College I had 4 years of experience working as an intern at KDWB, plus more radio experience that I gained at KAUG.   I had lived in the Twin Cities of Minneapolis/St. Paul all my life and I had a great circle of friends and great family support. Because of KDWB my radio name of “Intern John” brought me increasing recognition in the Twin Cities.

I also realized that if I wanted my career to grow, I would need more on-air time and experiences like being a Music and Program Director for a top 40 station.  It was time to take the next career step although it would probably mean leaving the Twin Cities.

After several conversations with my Business professors at Augsburg College and with Dave Ryan and other mentors, I started to search for other opportunities in radio. Thanks to my work experience during college, especially with KDWB and the campus station KAUG, I was offered a few positions once I started looking in earnest. I chose the Music Director position at a top 40 station in Des Moines over a higher paid on air position in Nebraska because I wanted the music director experience on my resume.

At KISS 107.5  in Des Moines  I hosted  my own evening show and was the station Music Director, so I did all of the music programing.   Again, my goal was to exceed job expectations by doing more than what was expected.  I worked long hours, days and weekends to learn as much as possible. The Program Director at KISS 107.5 was Greg Chance. I was again fortunate because “Chance” proved to be a good teacher, a good friend and a good mentor.

Working at KISS provided a great opportunity to grow in my career, and Des Moines was a very good place to live. I worked at KISS for just about a year and then got the unbelievable opportunity to work on a syndicated morning show in a major market.

A radio colleague suggested that I send a tape to the KANE Show on WIHT – HOT 99.5, a top 40 station in Washington D.C.  I did a phone interview with Kane; the host of the top rated syndicated morning show, and was subsequently hired as an on-air personality with my radio name of “Intern John.”  That was just about a year ago, and it has been the experience of a lifetime. The show is also broadcast in Baltimore, Tampa Bay, Cincinnati, Memphis and Louisville.  I thoroughly enjoy what I do, especially working with KANE and the rest of the morning crew on 99.5.

Everybody works a job, but few people get to do things they really like to do. So, plan for your career now while you are in college.  Explore opportunities for things that interest you. By all means seek out and work internships, even if unpaid, in career areas of your choice.  Always do more than expected, and learn as much has you can.  Build relationships with your college professors and mentors in your chosen career field, and listen to their advice.

Remember, it’s not about getting a job; it’s about vocation!!!