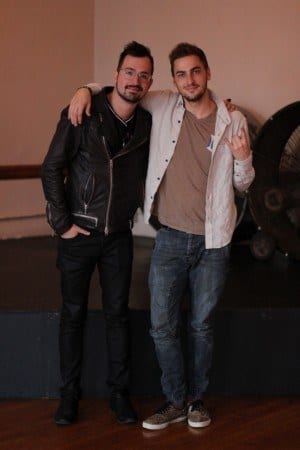 Most known for his role in the notorious boy-band, Big Time Rush, Kendall Schmidt and guitarist Dustin Belt have resumed their first-ever musical project, Heffron Drive and this past week, released their debut album, Happy Mistakes on Sept. 9.

We caught up with Kendall and Dustin at their recent show in Detroit to talk about the new album, “Parallel,” transitioning from BTR, TOLBooth Records and more.

College News: Your guys’ debut album [Happy Mistakes] came out this past week, that’s exciting. Congratulations. What has the reaction been like from fans?
Kendall Schmidt & Dustin Belt: Thank you.
KS: I mean, they’ve actually really enjoyed it. The main thing we’ve been talking about, we wanted to make a record so that people who already enjoy Heffron Drive had something to look forward to and enjoy and also something if you’ve never heard of it before it’d be approachable to you the same way. Both of those things have happened, the original fans love it and we’ve had people showing up to concerts like ‘I’ve never heard about you guys before, I came to check it out.’ We love that obviously because as a band you always want new fans to come check out it out. So overall it’s been better than we can ask for.

CN: That’s exciting. Have you faced any difficulty with fans who were fans of Big Time Rush trying to transition into this new musical endeavor?
KS: Yeah, I think some people are still upset and I’m not really sure why because this doesn’t have anything to do with anything but just continuing on. I would hope that they get over it obviously but if they don’t want to support it that’s fine, they don’t have to. But we’re just going to continue trucking on and not stop.

CN: The album was released as a part of your record label you started [TOLBooth Records], what inspired you to create your own label opposed to working with another label?
KS: Probably all of my experiences being with a major label. I’ve seen all aspects of it now. There was people I knew who were with a label and didn’t have the kind of deal that even Big Time Rush had so I’ve seen people who have had a minimal deal to people like Big Time Rush where it’s full on. So I saw all of it and I kind of just weighed my options and it was like you can do it without a label and it’s going to cost a lot and it’s going to be risky but the benefits are way more because then no one owns your music but you. For me, if you write a song you should own a song, you work with a label and they take 80% of your song and it’s like ‘You didn’t write it.’

CN: Yeah, exactly. What would you say has been the biggest obstacle or challenge you’ve faced either personally or professionally in creating this album, if any at all?
KS: Trying to come up with a sound.
DB: Yeah, when we first started on the album we had 15 or 20 songs and we were like ‘Cool, we have an album.’ Then we played them all together and they just sounded like a bunch of singles.
KS: It sounded like a mess.
DB: It was just a bunch of singles, we were all over the place. So we took 4 of the songs we thought sounded cohesive and kind of worked from there the rest of the time working from that set and kind of working around it.
KS: Which to classify it, I think it would be indie-pop but it’s like singer-songwriter indie-pop so it’s different.

CN: So with that said, why was “Parallel” selected to be the lead single off the album?
KS: Probably because it was the most interesting of the stuff in that earlier stage of it because when “Parallel” got released there was only— the only songs there were to choose from of that quality were “Parallel,” “Art of Moving On,” really it was just a couple of songs. “Art of Moving On” I felt was a little too…what’s the word I’m looking for? I needed something with a little more power to it to put out for the first song and that’s why I picked “Parallel.”

CN: Did you have any difficulty in the songwriting process with “Parallel” or did it kind of just come together on its own?
KS: Yeah it actually took awhile, it took three separate sessions over three weeks. The beginning of the song had a lot of electronic elements, like if you could imagine the beginning guitar part being a synth or something that’s what it sounded like and there was no acoustic elements at all to it which it just didn’t sound right, especially with me doing it. I love EDM but I wasn’t setting out to create an EDM song, I was set out to create a transitional song. So that changed and lyrics changed and the bridge was the last thing to come together because the bridge usually is the last thing to come together in our experiences of writing. It was difficult but sometimes the best songs are difficult and you have to work through it, you can’t get discouraged.

CN: The song is obviously about love but I really like the approach because you sing about the universe and stars aligning so I have to ask, do you guys follow astrology at all and did that have any influence on the lyrical aspect of the song?
KS: I don’t know how much we follow astrology but believing in the stars I suppose.
DB: I know a little bit about it but I don’t follow it too much I guess.
KS: I guess I would dive more into astrology than any other religion I think so, yes.

CN: Were there any experiences that inspired this song?
DB: Well, Kendall is really stubborn so, that just kind of popped out for you.
KS: Yeah, it’s about someone you really like and it just doesn’t work out for a long time and then eventually it ends up working out and that’s definitely happened, totally, maybe a couple of times.

CN: Do you feel that this album is an accurate representation of your artistry?
DB: Oh, for sure.
KS: Great question. Yeah, as much as it can be. You’re taking a total risk with new music and we thought about redoing some of the older Heffron Drive stuff, like the original 5 songs even though they’re already complete, just redoing them and making them more modern and it just didn’t sound right, they sounded outdated and obviously because they are. So we were like, ‘You know what? It’s gotta be all new music.’ And then we were in that stage where we had no idea what was going on and then it was like now we have to hone this in, this stage is getting through it.
DB: Plus, since it’s released independently every aspect of this album we had our hands on, down to the fonts used in the CD booklet.
KS: Which can drive you crazy too, it’s a lot of stuff.
DB: Yeah so we had a hand in everything, who mixed it, mastered it, we chose everybody.
KS: And even one of the girls who mixed the songs was far more expensive than other people, but I didn’t want to sacrifice quality for the actual sound of the mix and so we went with her and she ended up mastering the whole thing and that’s why the album has a whole cohesive sound and it was totally worth it.

CN: Do you feel that it’s overwhelming getting to be a part of every aspect? I’m sure it’s worth it though.
KS: It’s totally overwhelming but it’s also that much more satisfying as well. Let’s say somebody texts me and says, ‘Dude, album is sick. Congratulations.’ That means a lot because we know what went into it. Like BTR was a lot of work too, it was a lot of vocal recording so then the album was finished and it’s like ‘Congrats.’ and ‘Oh, thanks I worked really hard on those vocals.’ So this is like ‘Thanks, I worked really hard on all of it,’ so I really appreciate the compliment.

CN: Do you have a favorite song on the album either for meaning or because it’s really fun to perform?
KS: Okay, we’ll do both. Really fun to perform, “Happy Mistakes,” I don’t know how you feel. It’s just a powerful song, live especially.
DB: Yeah, definitely.
KS: Meaning wise, the most metaphoric song is “Nicotine” so singing it is fun because it’s like wordplay.
CN: I’m excited for that. Do you have any pre-show rituals?
KS: We’re getting there.
DB: We had like 15 of them with BTR and now we’re like, ‘No, we don’t want to do any of that now.’
KS: It’s for that band, when we play shows again that’ll be there but we wanted to have our own thing and we also don’t want to force it so I think we have the beginnings of one. Dustin and I have always just given each other a hug and said good luck, have fun and yeah we have one. We’ll have to develop it a little further before we talk about it though.

CN: Okay, in your opinion how important is social media in the music industry today compared to 10, even 5 years ago?
KS: I don’t even think it even mattered 10 years ago, 5 years ago you were really smart to get on it actually. If 5 years ago if you got on it, in the beginning, which even the Heffron Drive Twitter, which now it has become my Twitter over the years, but that was like 2008 and it was for nothing besides everyone else had one. It would make sense for us if we were going to talk about band stuff to have a Twitter but at the time for us it was MySpace. MySpace was hugely important because it showed us how many people were listening to a song everyday and now it’s the number one promotional tool because you can do advertising with companies and all that kind of stuff costs money and now you can just tweet.
CN: And I’m pretty sure MySpace now is all music.
KS: It’s all music and it’s also not doing very well. So now for music, SoundCloud is a great way to put things out. If you’re not trying to make money off of it and just release it, SoundCloud is a great way to get people interested.
DB: Vimeo is good for videos.
KS: Vimeo is awesome for videos, which we’re also working on videos for the new stuff. It’s the most important thing ever, I would think. Word of mouth is still number one.

CN: Do you have any plans to sign any aspiring artists to your label?
KS: Absolutely and I’ve always said I always kind of look for stuff that’s different. There’s a lot of people who can sing and stuff like that but I’m always looking for tone, style and confidence is a big thing, really.

For more information regarding upcoming Heffron Drive tour dates click here. Be sure to pick up a copy of Happy Mistakes on iTunes or Amazon and stay connected with Kendall and Dustin via Twitter.