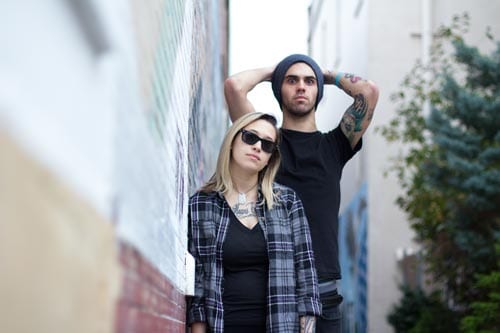 18th and Addison are a powerful American punk rock two-piece from Toms River, New Jersey and they rock! Consisting of vocalist, Kait DiBenedetto and guitarist, Tom Kunzman, 18th and Addison are a young new punk rock band ready to hit the road. Having recently released a new album named “Makeshift Monsters”, Tom and Kait express the value of having a mindful imagination.

“It’s about having fun and not being distracted by the dumb things in life that hold you back from doing the things that you want to really do.”—Kait DiBenedetto, 18th and Addison

College News magazine recently had the opportunity to catch with 18th and Addison’s frontwoman Kait DiBenedetto right after their Nashville tour. Kait let us in on why having an album is so important in addition to an EP, what it’s like playing on the road and their plans for the near-future. But what struck College News the most was their dedication to having fun, being real and never giving up on your dreams. Nothing illustrates this more than their single titled “War” that sets the tone for their second ever recording and first full-length album. Make sure to check out this awesome punk rock duo that will be sure to be a new favorite on your playlist.

College News: You have this punk rock two-piece with Tom! Why a two-piece?
Kait DiBenedetto: We were both in separate bands when we were younger. Those bands decided to move on, so we decided to jam together. It felt right to start writing our own songs together. Then it slowly developed into something more serious. That is kind of how it started. We both played music separately, and it just felt right to do something together.

CN: Now the two of you have your second recording, “Makeshift Monsters” with your single titled “War.”
KD: “Makeshift Monsters” is awesome! We’ve been writing songs ever since we put out our first EP called “Little Parasites”. It is a continuation of a ton of inspiration. We took a bunch of songs that we had written from around the same timeline of the release of our debut EP then wrote some new ones. It all came together organically and naturally! The album has something for everybody. So whether you like pop, rock or punk, it has a bit of everything!
It is kind of a mix of all the genres that we love and everything that we love to write as well. The EP only had seven songs on it, so we had to pick and choose. But having an album is so much easier, because we got to play more songs and just had more options. We felt like “War” was a really good fit for our first single and representation of the actual album itself. It is an aggressive song! So that is why we decided to make that song a single and do the music video for it. We feel like people can relate to it!

CN: How were your recent tour dates for 18th and Addison in Nashville?
KD: I’ve always loved Nashville; it was awesome! Nashville is always a great place to go for a musician. There is always music going on. We were walking around downtown Nashville, and we couldn’t take two steps without a band playing in one bar and another band directly next to them. It was just a lot of music everywhere! It was great! There is also a lot of history there, so playing there was an awesome experience. We played with other bands who were very welcoming to us! It was a great experience for us and a very long drive, but it was fun!

CN: You guys have this video of the two of you, rocking on in this office. What can you tell me about the video for “War?”
KD: “War” is fun because it is a song about not forgetting who you are and living your dreams. It’s about having fun and not being distracted by the dumb things in life that hold you back from doing the things that you want to really do. That is why we had the little younger versions of ourselves in the video. It helped portray our message like—stop worrying about bills, stop worrying about a job and do what you want to do. Whether your dream is music or being an entrepreneur, whatever it is, it’s something that were really excited to do! We had our family in the video. They played the little versions of us, so it was fun to include them. The story really came together well with the video. I think a lot of people put two and two together behind the meaning of the song. It made a lot of sense and it was really fun to shoot.

CN: What’s next for you guys?
KD: We really just want to keep touring and travelling! There is nothing really left to do here in Jersey. We’ve done all that we feel like doing, and we are ready to get out of here. Our recent tour got us really excited to start traveling more. So we are going to start doing stuff up and down the east and west coasts. Maybe we will move off to the mid-west in the next couple months or within the next year. We are also constantly writing, so there might be some new music along the way. We will see. In the meantime, you can follow us on our social media channels to keep posted with tour dates.
Check out punk rock duo 18th and Addison’s facebook page, here: https://www.facebook.com/18thandAddison/