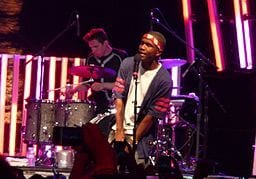 Frank Ocean, seemingly everyone’s favorite rapper these days, publically expressed his wish that Chris Brown, everyone’s least favorite rapper, be prosecuted for the brawl he engaged with him last Sunday. Brown, who is still serving 5 years probation for beating another beloved member of the hip hop community, his ex-girlfriend Rihanna, would have his probation revoked if he were prosecuted, meaning that jailtime is a very real possibility for the bad rapper/terrible human being.

Frank Ocean hasn’t filed any charges yet relating to the Sunday brawl, but is “desirious of prosecution”, in the words of L.A. County Sheriff’s spokesman Steve Whitmore. The incident in question took place last Sunday, in which Frank Ocean claims he was jumped by “Chris and a couple guys”, resulting in a cut finger. Authorities responded to calls about a fight involving six men, and cited witnesses who reported that Chris Brown threw the first punches at Frank Ocean.

The incident does nothing to rehabilitate Chris Brown’s awful image in the public eye, though assaulting Frank Ocean, one of the industries hottest and most well-liked stars, is a definite step further into the public relations hole. Chris Brown is feeling the weight of his increasingly idiotic decisions, and he expressed it by Instagramming a picture of Jesus Christ with the caption “how I feel today”. Dude, come on. Are you serious. No.

Frank Ocean and Chris Brown are both nominated for Best Urban Contemporary Album in this year’s Grammy Awards, and Frank Ocean will probably win because he’s a good human being and has acutal musical talent. Ocean’s album “Channel Orange”, was a critical success and a commercial success, while Chris Brown’s album doesn’t even justify mention in this article because he’s such a despicable person.