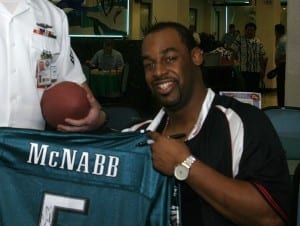 Donovan McNabb looks for a home team to return to his quarterback position, but nobody wants him. While he misses his sport, the last team he played for, the Minnesota Vikings, skipped him throughout most of the season, his having only played six games.

McNabb has been working with George Whitfield, a quarterback connoisseur to help him in his comeback. The training has lost McNabb weight and he remains in prime shape. McNabb said he has been, “Just kind of refining the skills, working on the mechanics and getting back to a high level, an elite level. I’m just waiting for the opportunity to display that.”

Last November, an injured Jay Cutler brought a hopeful opportunity to McNabb, to join the Chicago Bears. But McNabb was never contacted to fill the role. Even as a 13-year veteran, having played in five NFC championships and one Super Bowl throughout his 11 seasons on the Philadelphia Eagles team, he is going through a long and vacant patch (The Los Angeles Times).

McNabb hopes to continue his passion, but feels that nobody is cooperating with his desire. His skills include passing over 37,276 yards, and scoring 234 touchdowns. Andy Reid, coach of the Philadelphia Eagles only has kind words to say about McNabb. Reid said, “He looks good. He looks physically good. He looks like he could go out and play tomorrow. I would highly recommend [him].”

While Reid did not refer specifically to the possibility of taking McNabb back on to the Eagles, McNabb holds a list of 32 prospective teams for himself.

Despite so much resistance from coaches, McNabb remains confident. The quarterback back in training said, “I would vote for myself for the Hall of Fame.”