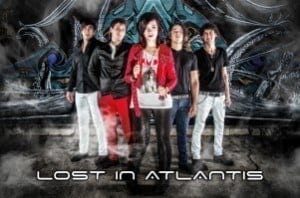 A sea of colors pours from the mouth of Lizzy Rosnowski to preface the collaboration of instruments in “Tek No” of Lost in Atlantis, and accompanies the drummed heartbeat of the song – the deceptions and angst that come with the start of another semester. Lost in Atlantis brings you your new school season with all its new challenges – roommates whom you deemed your good friends only months ago, or your core classes creating confusion concerning your major; run with the stampede that is the professional world, and use Lost In Atlantis as a guide. As though a female version of Silverstein, let the yearning of Lizzy Rosnowski, and the persistent guitar riff of Lost In Atlantis tear through you via “Tek No,” and help you make your mark. Don’t let the small moments ruin you – rather fight back, and become what you want to become.

An avid and devoted Muse fan, I can’t help but to fall into the deep, determined bass line intro of “Sometimes” from the album, “Can You Hear Us Now?” of Halocene. The intro immediately reminds listeners of the tenacity in “Hysteria” off the worldly “Absolution” album of Muse.  Although the vocals of Addie Nicole are not quite a male falsetto, they are easily comparable to the youthful clarity that comes from the throat of Ellie Goulding. The band has covered “Lights,” a popular hit from the debut album of Ellie Goulding. With persistent guitar strokes and a surprising bridge that brings the sound of sporadic illumination, Halocene throws its listener back into the hasty desperation that Addie Nicole is conveying with a backing vocal that wails for support from “you.”

Finally, with acoustics that contradict the determination of Halocene and Lost In Atlantis, comes Gabe Kubanda with “Across The Room.” The vocals of Gabe Kubanda narrate the timidity that only his guitar and vocal progressions can clearly convey, as the soft, flawless string section brings the setting to life. It’s that burst of confidence needed to finally get the number of the beautiful girl at your college party whom you may never see again unless you seize the day. Gabe Kubanda has an untainted falsetto, which bridges the gap between these juxtapositions, and leaves the listener yearning for more.