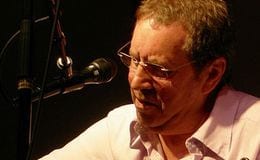 Bert Jansch, founding member of the British folk group Pentangle, has died at the age of 67.

Billboard reports that the Jansch-founded Pentangle was “a nuanced, visionary mix of folk and jazz music that found a huge audience for its complex arrangements and stunning musicianship.” Jansch has been praised by the likes of Jimmy Page, Neil Young and Johnny Marr, and has been recognized by Rolling Stone as one of the 100 greatest guitarists of all time.

As of the time of this writing, no official announcement has been made via Jansch’s Twitter, Facebook or official site. Jansch’s Facebook wall, however, has filled with fans giving their final respects. Jansch’s death is also being mourned on Twitter, with the A.V. Club and NPR both expressing their condolences.

Jansch recently had to cancel a show on September 20 due to his illness. His final tweet read, “Thank you all so much for all your get well messages – here and on http://www.facebook.com/bertjansch – hope to see you soon! lots of love, Bert.”

Read more about the life and career of Bert Jansch here.