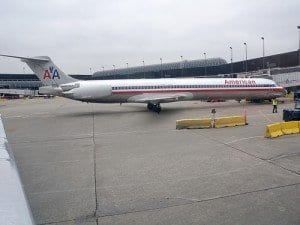 American Airlines grounded all of its flights Tuesday after a computer problem. In the late afternoon, the problem was fixed, and its flights slowly returned back to normal.

Over 400 American Airlines flights were canceled and many more were delayed. The company said the problem was that it could not gain access to its reservations system, Sabre. The system is responsible for bookings, reservations, boarding passes, online check-ins, ticketing and tracking bags.

American Airlines said the cause of the problem is not clear, but it is not related to any type of attack or threat. Safety officials at airports were on high alert Tuesday after the bomb attacks at the Boston Marathon, however. A suspicious package was received at La Guardia Airport in Queens, which caused a terminal to be evacuated briefly.

However, the problem did not come from American Airlines’ computer systems, because other airlines, like Southwest Airlines and JetBlue, use Sabre and did not experience any issues with the system.

American Airlines said their network system experienced “intermittent problems,” and as a result of grounding all flights, offered to waive fees for passengers who wanted to change reservations and offered full refunds to those canceling flights.

Some passengers were upset about the way the situation was handled, as some people were stuck uniformed for long periods of time. One passenger told the New York Times that he got a Facebook update about the situation on his phone 20 minutes before American Airlines employees notified people at the airport.

The Federal Aviation Administration confirmed that American Airlines got permission to hold its flights.