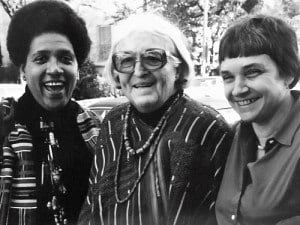 Jewish poet leaves behind quite a legacy

Adrienne Rich has died at the age of 82 from complications with rheumatoid arthritis. Adrienne Rich was a Jewish poet whose works of literary art have influenced anti-war, feminist and gay rights activists for generations.

Adrienne Rich was born to a Jewish father and a Protestant mother in 1929. She grew up in a time when not much was expected of women; Adrienne Rich was encouraged by her father, who was a doctor at and medical professor at Johns Hopkins University, to write poetry at a young age. She attended Radcliff College where she graduated in 1951and was awarded the Yale Younger Poets Prize for her first poetry book, A Change of World.

Adrienne Rich married Alfred Conrad, a Harvard University economist, in 1953 and had three sons. Her time as a mother and wife brought her back into writing, where she started to evolve her identity. Adrienne Rich had always gone through different phases and has, herself, recognized that. She wrote in Delta, “If you think you can grasp me, think again.” Haaretz.com wrote on Rich’s identity, “In her brilliant 1982 piece, Split at the Root: An Essay on Jewish Identity,Rich wrote, ‘The experience of motherhood was eventually to radicalize me; but before that I was encountering the institution of motherhood most directly in a Jewish cultural version; and I felt rebellious, moody, defensive, unable to sort out what was Jewish from what was simply motherhood, or female destiny.” In 1970 she left her husband for Michelle Cliff, a writer and editor, who she stayed with until her death. Shortly after she left her husband, he committed suicide.

Adrienne Rich was recognized for her poetry with numerous awards including a MacArthur “genius” fellowship, the Bollingen Prize, Brandeis Creative Arts Medal, two Guggenheim Fellowships, a Ruth Lilly Poetry Prize as well as many others. Adrienne Rich was also known for her strong political opinions on many issues including the numerous wars she lived through. In 1997, Adrienne Rich refused to accept the National Medal of Arts from President Clinton because she claimed the administration had “cynical politics.”

Adrienne Rich left behind a legacy that many communities are grateful for. A longtime friend of the poet, W.S. Merwin, a Pulitzer Prize winner, said of her, “She was very courageous and very outspoken and very clear. She was a real original, and whatever she said came straight out of herself.”