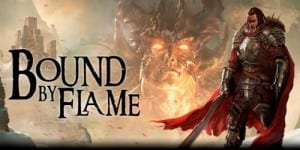 The fantasy games genre, particularly with Action-RPGs, is hands-down my favorite. That’s why, when I heard of Bound by Flame, I had such high hopes. This genre, more than any other, has the potential to take a lower-budget game and propel it to greatness. If the action is manageable, the customization and equipment is robust, and the story is simply passable, there’s a recipe for greatness.

After playing through the campaign and experiencing it in full, I can’t say that Bound by Flame is going to win any awards, good or bad.

Your character, a name you choose, is called “Vulcan” regardless, is possessed by a demon that has powers of fire. Pretty handy considering most enemies you fight use ice, including the Ice Lords mentioned throughout the narrative. Using the demon’s powers isn’t necessarily a given though, because as you level up you’re presented with options in combat.

If you’re a fan of brute force, the warrior tree is for you; faster, more damaging attacks are controlled by the ranger; and the final skill tree focuses solely on fire magic. You can certainly mix and match as you desire, but your character reaches full potential by focusing on one skill tree first, then branching out into other areas. By the end of the game though, your character may have mastered one tree, but only has enough skill points to dabble in the first or second tiers of the others, with no option to reset your points and try a different style mid-game.

Combat is, unfortunately, stale and incredibly boring. It gives you the impression that it may be rewarding early on, like a date that starts great, but soon you realize that everything you thought was interesting is shallow and unimpressive. After about the midpoint of the game, combat becomes a mush of button mashing due to enemies having no inkling of tactics. Every encounter is a straight-forward affair of, “Run in, use the same few maneuvers, then move on to the next enemy.”

What’s even more disappointing is the fact that you have a trove of party members, each with their own unique personality and combat style. But because combat is so bland, sticking with the character who can heal you is always the best option. Granted, you’re forced to use other characters at certain points, but by then combat is simple and uninteresting anyway.

Dialogue can sometimes lead to side quests or unique party-missions ala Mass Effect or Dragon Age, but the dialogue is horrific that a chore to sit through. You’ll be skimming the conversation as fast as possible due to the odd choice of Old English mixed with modern-day slang. Coupled with the abortion that is the voice acting, you’d be better off listening to GWAR on full volume while stabbing yourself in the ears.

Despite my hyperbolic criticisms of the dialogue though, the game doesn’t necessarily follow that same terrible attempt throughout. It’s not entirely beautiful, but there are some scenes that will stick out and make you tilt your head in appreciation. Combat, while tedious and boring, isn’t broken or worth avoiding. Nor will you encounter any particular bugs that ruin your experience. The game isn’t necessarily short either, so picking it up on sale at $9.99 will net you a decent time sink (It’s $29.99 now on everything except Playstation 4, where it’s $39.99).