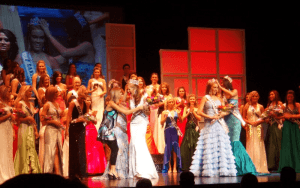 A second Miss USA contestant has come forward to claim the beauty pageant was fraudulent. Unfortunately, she remains anonymous.

The anonymous Miss USA contestant backed up Sheena Monnin, Miss Pennsylvania’s claim that Miss Florida Karina Brez was spotted with a list of the five finalist—way before the Top 15 was announced.

The contestant came forward and told Fox News, “I saw Florida backstage and she was very, very flustered and upset…I thought it might be because she didn’t make the top 15 cut, but at that point, she was able to reveal to me at least four of the five names who went on to be the top girls.”

“She couldn’t remember the fifth because she was so upset…Several of the girls started hearing through the grapevine about a list; a lot of people were upset.”

Monnin renounced her crown the day after the Miss USA pageant aired and accused the competition to being phony. Monnin wrote in a Facebook post, “I can no longer be affiliated in any way with an organization I consider to be fraudulent, lacking morals, inconsistent, and in many ways trashy.”

The contestant who saw the list first was Brez, claimed by Monnin and the anonymous contestant said she was only joking when she told the other contestants about the finalists.

Brez said in a statement, “Backstage during the pageant, I did see a piece of paper with names on it and like most people in such frenetic circumstances, joked that they must be names of the final contestants…It was a throwaway comment, in the stress of the pageant, and was never meant as fact…The list I saw didn’t even have the eventual winner on it.”

Monnin is sticking to her claim and says Brez changed her story out of fear.

Donald Trump is threatening to sue Monnin and insinuates she fabricated the story out of “loser’s remorse.” Miss USA pageant officials called Monnin’s claims false and show disappointment that she would try to steal the spotlight from the crowned winner, Miss Rhode Island Olivia Culpo.