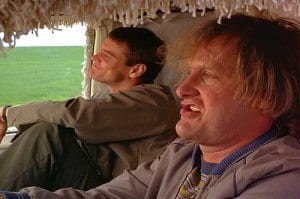 The dream of the 90s is indeed alive with Cult films of the decade gaining the spotlight these days with the announcement of a Jurassic Park 4 and now the announcement that Dumb and Dumber 2 will be happening. Void of those two imposters from the When Harry Met Lloyd prequel, this sequel features Jim Carrey and Jeff Daniels diminishing their brain cells as they prepare to step back in the roles of Lloyd Christmas and Harry Dunne. After winning his first Emmy this past Sunday for his role on The Newsroom, actor Jeff Daniels revealed after his win that he would be flying out to work on the sequel to the classic comedy.

“We’re going to party until dawn and then I’m going to hop on a plane to Atlanta and start shooting Dumb and Dumber 2,” he explained backstage at the Emmys.

Back in 1994, the original film followed Lloyd Christmas and Harry Dunne as they trekked across country to return a briefcase to a woman that Lloyd instantly fell in love with, only to be swept up in a kidnapping scheme. The original directors, Bobby and Peter Farrelly are also back on board. Last year, Peter disclosed the plot for this go around to the Digital Spy. “The story revolves around the fact that one of them may have sired a child. They want to go find the child because he’s having a kidney problem and he wants to ask him for one of his kidneys.”

Bobby and Peter Farrelly have fallen from grace lately, directing probably two of the worst movies to hit the silver screen in a long time with blunders Movie 43 and The Three Stooges. Hopefully, they will be able to capture the essence of the original while still appealing to current generations who might not be too familiar with the original movie.  Warner Bros. must not have believed it was possible, since the studio passed on the project in June before Universal Pictures took a chance and picked up the film.

Jim Carrey’s star also has started to dim with his appearance in films beginning to lessen. Dumb and Dumber will probably not be too violent since Jim Carrey refused to promote his last film, Kick Ass 2, since he felt the film had too much gratuitous violence. Jeff Daniels has blossomed out of his role as Harry Dunne to become a critically-acclaimed actor, whose portrayal as Will McAvoy won him an Emmy against the likes of Breaking Bad’s Bryan Cranston.

Hopefully, this sequel will please fans of Dumb and Dumber as well as gain new ones. The sequel is thought to be out next year.