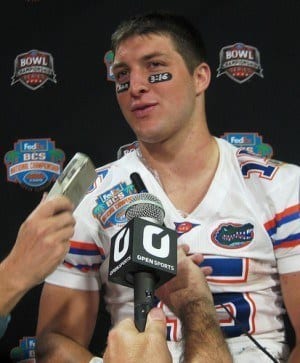 Tim Tebow is now a free agent, but negotiations seem to have stalled

Tim Tebow was released by the New York Jets over a month ago and little has been heard about him or from him since. The NFL draft is over and there has been no mention of Tim Tebow being tied to another team. Several anonymous sources have come forward to claim that Tim Tebow and his camp know his NFL career is over.

For many, this comes as a surprise as Tim Tebow was a Heisman Trophy winner and a successful quarterback for the Denver Broncos. However, he quickly became a household name not for his skills as a football player, but rather for his personal beliefs. Tim Tebow’s act of kneeling on the field in prayer became known as “Tebowing” and he caught mass media attention for proclaiming to be a virgin.

In fact, this media coverage is partially to blame for Tim Tebow’s dismissal from the New York Jets. One scout noted, “He’s not a quarterback. When you look at his run two years ago, when you watch the tape and break it down, he wasn’t really doing anything that impressive. He’s a tough guy, a great leader, a great person. But he isn’t a good enough quarterback to have all the distractions that come with him.”

Ouch. That has to sting. However, Bob Tebow, father of Tim Tebow, says the reports that his son’s career is over are false, telling reporters, “You are old enough not to believe all you hear.” Regardless, Tim Tebow has yet to make any indication as to his next move and the longer he waits, the less likely he will be to sign with another team. Despite offers from CFL and the Arena League, it seems likely that Tim Tebow will hold out for another NFL deal, or be forced to retire all together.