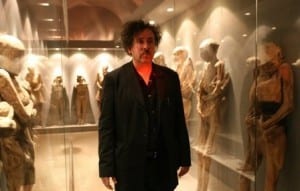 “Dark Shadows,” is back, but this time on the big screen. The trailer, released on Thursday, gives us a small glimpse of the film.
The movie, according to Hollywood Reporter, is about a “vampire who becomes a blood sucker out of water after waking up in 1972.”

Imdb.com explains the movie as a young Barnabas, who lived in 1752, breaks the heart of a witch named Angelique Bouchard, who curses him by turning into a vampire and burying him alive. Well when Barnabas finally wakes up, it is 1972. and he finds his house and family is chaos.

The movie, based on the gothic horror soap opera, will follow Barnabas Collins, played by Johnny Depp, and his encounters with various monsters.

The television show aired from 1966 to 1971 and became a, “cult classic, embraced by soap opera fans and lovers of irony,” according to The Wall Street Journal.

Joined by Depp in the cast are Helena Bonham Carter(The King’s Speech), Michelle Pffeifer(What Lies Beneath and Batman Returns), Chloe Mortez( 500 Days of Summer and Kick Ass) and Eva Green, known for her role in Casino Royale.

The film will be in theaters May 11.

Below is the trailer: