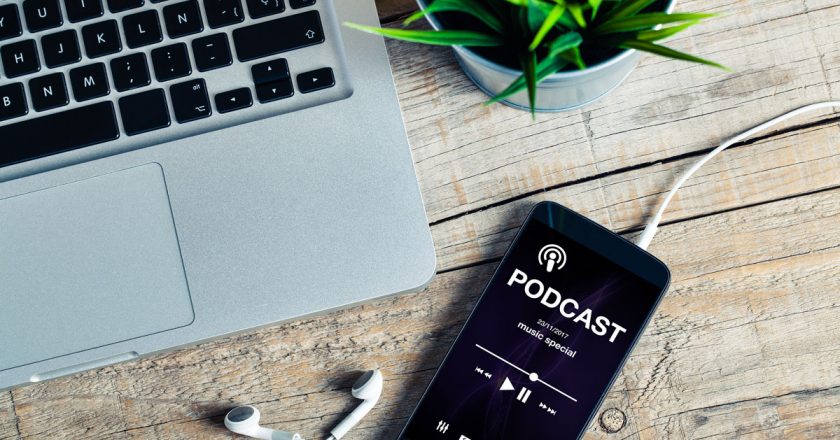 New year, new you, new opportunity to step up your walk to classes with some of these podcasts. From topics including everything from art heists to reproductive rights, here are the shows we’re loving (and ones we hope you will love too) in 2019.

We start with this can’t-miss from New York Times reporter Michael Barbaro. Every day, he delivers the cover story from the Times in a 20-minute, beautifully produced audio segment. The last few minutes always include the day’s other notable headlines, making sure that if you tune in, you’ll be caught up on your daily news. Keeping up with The Daily is a personal 2019 resolution, and we can’t recommend it enough.

This hit series, also from the New York Times, is told by journalist Rukmini Callimachi, who covers stories about terrorism. Through Caliphate episodes, she takes the listener on a journey to understand ISIS, capturing how everyday people can be persuaded into the terrorist organization. The uncovered story of Caliphate came at a cost—Callimachi and series producer Andy Mills both risked their lives reporting this story.

3. There Goes the Neighborhood

An in-depth look at gentrification, There Goes The Neighborhood focuses on specific cities by season. Season 1 centers around Brooklyn—weaving personal stories about the lives that have been displaced in the neighborhood’s transition with a well-reported analysis on what gentrification as a whole is doing to our cities. Season 2 covers the issue in Los Angeles.

With reproductive rights on the forefront of everyone’s mind these days, this podcast addresses that interest by delving into intimate, feminist health issues, answering that question that often tends to bubble up—“What’s wrong with me?” Created by Allison Behringer with support from KCRW, this exploration into the forces of history, society and identity has some truly profound episodes. We recommend starting with “Sex Hurts” and “Anxious Mess.”

5. The Cut on Tuesdays

This podcast, described by its makers as “everything The Cut can’t stop talking about,” is a delight. Each week, host Molly Fisher brings you two episodes (on Tuesdays, as per the name—and also on Thursdays when the podcast becomes The Cut on Tuesdays on Thursdays)—about women, pop culture, literature and everything else. Our favorite episode? “Hello and Welcome to My Bad Dinner Party,” which is told in the style of a gameshow as novice food columnist Madeleine Aggeler does her best to prepare a meal for the judges, who include Salt, Fat, Acid, Heat author and host Samin Nosrat among them.

Hosted by long-distance besties Ann Friedman and Aminatou Sow, this podcast feels like tuning in on a personal conversation—but a very intelligent one. The pair discuss everything from politics to pop culture and regularly host interesting guests—last year they interviewed Georgia governor candidate Stacy Abrams and the year before that, they hosted Hillary Clinton. We’re looking forward to their upcoming book Big Friendship, due to be published in 2020, which will be a deep dive into female friendship—another topic that gets a lot of airtime on their show.

If you’re easily spooked, don’t listen to this podcast when alone at night. This story is about the shocking and true events following Christopher Duntsch, a Texas surgeon who was convicted on criminal charges following two patients who died and 31 who ended up with serious injuries after he operated on them.

Jumping into another hot button issue, 16 Shots dissects the events of one night in October 2014, when a white police officer shot and killed black teenager Laquan McDonald. The shooting was captured on video and sparked outrage throughout Chicago. Now the police office is on trial for murder, and this is where 16 Shots jumps in with their excellent reporting.

This art-heist podcast has immediate appeal. It explores the real-life mystery behind the most confounding heist in history when 13 irreplaceable pieces, each worth half a billion dollars, were stolen from the Isabella Steward Gardener Museum in Boston. Even 28 years after this unsolved crime took place, it’s still exerting an irresistible pull. And if none of that is enough to interest you—perhaps the $10 million reward on offer might awake your inner investigator.

What if we told you that with no experience and only a few hundred dollars down, this podcast could change your life? Well, that would be a lie. The Dream investigates multi-level marketing (MLM) businesses—something you have encountered from your aunt’s friend on Facebook who’s trying to sell leggings or make-up. Legally, MLMs aren’t pyramid schemes, but if MLMs operate in a model where money is made off of other people buying into the company, then just how different are they? The Dream goes into all of this in their gripping, 11-part series.