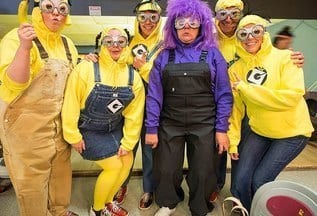 Halloween 2015 will bring in the big names for costume ideas

Halloween 2015 is a favorite college holiday, and college students across the country have the chance to display their costume creativity without the restrictions of a themed party. Not since the pressure of choosing a costume for the school parade and trick-or-treating during elementary school has Halloween been such an important (and busy) time of the year. After the high school drought where trick or treating was lame, the time has come again that you can be anyone for a night. Which one of these top 10 costumes for Halloween 2015 will you be this year?

To help you out, College News has compiled a list of the top 10 costumes for Halloween 2015.

Also read: Costumes4less.com- The NAME that spells trust and trendiness in the Halloween Costume sector

For a holiday that is a kid-favorite, why not go full-ten-year-old this Halloween 2015 season? These little goofballs from Despicable Me are as popular as ever with their own summer blockbuster, so this is a great year for you and your friends to break out all of your yellow clothing, pop on some goggles, and have a blast in a night that caters to the villainous.

Admit it; Halloween is a time to judge.  Whether judging costume contests or the amount of skin your ex is showing, the whole world is on trial on Halloween. Since the Supreme Court is coming off a big year with marriage equality, why not honor them with a Halloween costume. It’s as easy as finding an old graduation gown around campus. Bonus points if you can find eight friends to join you.

The police were all over the news this year, so plan on plenty of people reenacting Let’s Be Cops at Halloween 2015 parties no matter their stance on the issue. This costume is a great excuse to have a pair of handcuffs for the night, too.

Girls have it pretty easy on Halloween when it comes to costumes.  From nurses to nuns, adding tights or shortening the skirts of everyday uniforms is a college Halloween go-to. While this costume goes more for sexy than scary, doing it right will make your costume a hit.

6. Orange is the New Black

Pick up an orange jump suit from any of the thousands of Halloween 2015 costume stores that will pop up around campus and add a personal touch to become a character from the Netflix favorite. Just don’t pull a Julianne Hough and make your personal touch black-face so you can be Crazy Eyes for a night.

If you can’t decide on a single costume this year, look for a lime green morph suit and your Halloween shopping will be complete. Add to the ambiguity by carrying around a selfie stick and people will think you are tech savvy enough to Photoshop any person into your photos.

Still have a closet full of soccer equipment? Break out the shin guards and celebrate the United States Women’s National Team’s World Cup victory this Halloween. Pick a favorite player and throw her number on your back because 2015 was a big year for U.S. soccer that will still be relevant in October.

Pirates, princesses, ghosts, and witches fill the streets on Halloween, and most of them are about four-feet tall. Take a trip home one weekend before Halloween and see if you can dig up any of your own old costumes. It might be fun to revive the old standards with a college-twist this year now that treats are more about shots than sugar.

A great Halloween costume will get likes on Facebook and laughs at parties, but a terrible costume has the potential to haunt you long after the ghost decorations are traded for turkeys. Do yourself a favor this Halloween 2015: don’t dress up like Hitler, Bill Cosby, or ISIS. Call it an early Christmas present to yourself, and have fun without being stupid or offensive.

You should also read: 5 Halloween activities for adults

Donald Trump has been making headlines with his outlandish remarks during his 2016 presidential run. Expect people to be rocking that horrible hair and smug look on thier face when they impersonate this presidential troll for this top costume idea for Halloween 2015.

You should also check out: Top 5 Haunted Campuses