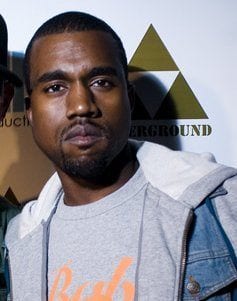 Professes his love for Kim K

The often outspoken Kanye West is at it again. In true Kanye West, the music star professed his love to Kim Kardashian in his new song Theraflu.

Named for the over the counter cough remedy, West raps on Theraflu telling fans that he fell in love with the Keeping Up With The Kardashians star at about the same time she started dating her ex-husband Kris Humphries. That one guy who she divorced and threw to the media dogs after 72 days of marriage.

Kanye even refers to his rap pal Jay-Z who has stake in the New Jersey Nets, Kris Humphries basketball team, rapping the verse, “And I’ll admit, I fell in love with Kim, ’round the same time she had fell in love with him, well, that’s cool, baby girl, do ya thing, lucky I ain’t have Jay drop him from the team,”

He continues his trademarked egotistical charade with more verses like, “tell PETA my mink is dragging on the floor,” and “six thousand-dollar pair of shoes, I made it to the Paris news.”

The rapper even refers to his ex-girlfriend Amber Rose’s recent engagement to rap star Whiz Khalifa. Kanye raps, “I got respect for Whiz.”

There was some confusion on if the song was for the Kanye record or the D.J. Khaled record, but after Ye’ released the cover via twitter, all signs point to Kanye. The image depicts a topless woman whose head has been replaced with a bottle of Theraflu.