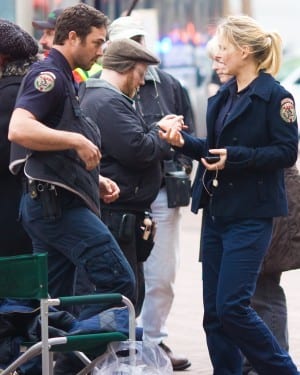 Chicago Fire returned to NBC on Tuesday and Lady Gaga was cheering for boyfriend Taylor Kinney from the sidelines.

The very private couple first met in 2011 on the set of Gaga’s video for “Yoü and I,” and despite their hectic schedules and demanding careers have managed to keep going strong.

Gaga, 28, took to Twitter on Tuesday to show support for her handsome boyfriend who plays Kelly Severide, a lieutenant in the NBC drama.

The series which returned for a third season Tuesday night follows the professional and personal lives of firefighters and paramedics working at the Chicago Fire Department at firehouse of Engine 51, Truck 81, Squad 3, Ambulance 61 and Battalion 25.

The season three premiere picks up in the middle of a call gone bad where we witness the aftermath of an explosion and watch with heavy hearts as firefights of Firehouse 51 make their safety known.

When Severide (Kinney) and Casey (Jesse Spencer) call out to Ambulance 61, the plot deepens as we wonder which member we will be forced to say goodbye to forever.

The beloved character who leaves us in the season premiere is none other than paramedic Leslie Shay (Lauren German) who suffered a fatal head wound and could not be revived no matter how hard Dawson (Monica Raymund) and Severide tried to bring her back.

The loss of their partner sends members of Firehouse 51 into isolation. Dawson blames herself for Shay’s death and begins attending therapy, a secret she keeps to herself while Severide leaves and isolates himself in the woods.

Casey soon finds Severide and reminds him that brothers and sisters like Shay didn’t die without a reason, but rather to save lives in which the night that Shay risked her life 10 other lives were saved and that alone is enough to bring Severide back to Firehouse 51.

Though the show will never be the same without Shay, it will undoubtedly be a season to remember. You can catch upcoming episodes of Season 3 of Chicago Fire on Tuesdays at 10/9C on NBC.