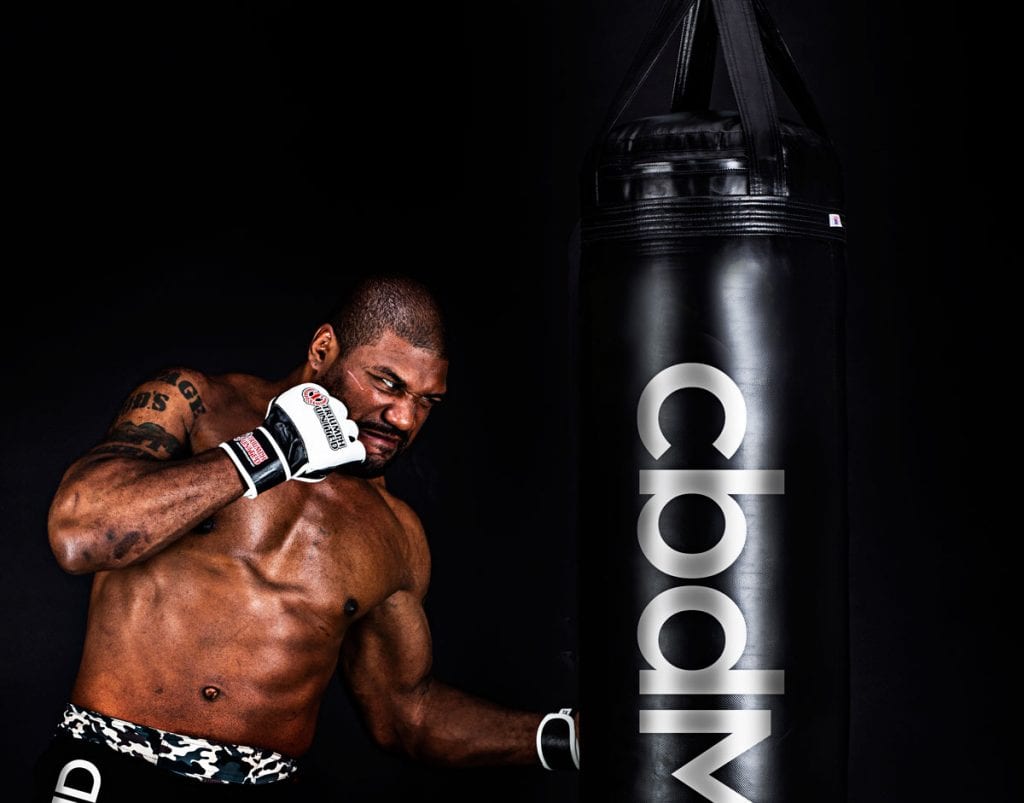 When I speak to Quinton “Rampage” Jackson, the professional fighter turned actor, it turns out he’s remarkably kind and funny—something, which, if I’m honest with myself, I hadn’t expected from a man called “Rampage.”

Rampage Jackson’s career is impressive and diverse. His first big break in the wrestling world came in 2001 in Japan in the country’s Pride Fighting Championships.

A few years after that in 2006, he started fighting in the UFC (Ultimate Fighting Championships). Coinciding with his rising success in the professional fighting world was the world’s growing interest in professional fighting, and it was this media attention that helped him launch his acting career.

His jump into acting came during time off he had to take to nurse an injury. He was cast in a movie, and after watching Jackson act, the director told him he was a natural.

“He said I should pursue acting, and so I did—that was that,” Jackson says.

When Jackson started wrestling in high school, he took it up as a hobby to stay fit. He never would have predicted that after school activity would lead him on to a legendary wrestling career and starring roles in major films. “Not in a million years!” Jackson exclaims.

On his acting break

Arguably, Jackson’s biggest break came when he landed the role of B.A. Baracus in The A-Team (2010). Until then, he had been firmly in the wrestling world—when he wasn’t fighting for UFC, he was working on small films about fighting. The A-Team brought him a much broader audience on a much larger screen, alongside Liam Neeson, Bradley Cooper and Jessica Biel.

Working on the film was great, Jackson tells me. He had been a fan of the television show The A-Team when he was a kid. “I loved Mr. T!” he says. But acting on that level was a learning experience. “You know, I had to bring my A-game, because those guys are great actors. I had the least experience out of everybody,” he says, but then adds:

“But you know, my role was perfect for me because all I had to say was ‘Shut up, fool!’”

Jackson still remembers how lucky he felt just to be working on The A-Team.

During the audition, he forgot one of his lines, he admits. “But in that moment, I remembered my acting coach told me, ‘If you mess up, don’t break character, just pause and remember your lines, and then go from there.’ So that’s exactly what happened when I forgot my lines—I took a nice deep pause, and then I remembered my line.

“And right when I said it, the director was like, ‘Cut! Cut!’ And I thought I messed up, but he was like ‘Excellent!’

And we walked away, and he said, ‘You got the part.’ He told me later actually that test is what got me that part.”

“It was real strange,” Jackson says, when I ask him how his life changed when he suddenly found himself in the public eye.

Particularly because the UFC and MMA weren’t as popular when his career started as they are now, Jackson never anticipated the attention.

“At the beginning of my career, I was fighting in Japan. And that was nice, being famous in Japan,” Jackson says. “Not gonna lie, I loved it. I loved the attention in Japan, ‘cause then I could come home, and nobody knew who I was. I could be a regular guy.

“I was a big guy, and people could tell I was an athlete but no one knew that I was a professional athlete really, only the hardcore MMA fans. But it was around 2007, when I won the belt in America, and it changed my life overnight.

Suddenly my neighbors knew who I was, and you know, there was less privacy. The more popular you get, the less privacy you get.”

Jackson made headlines last year when he said in an interview with ESPN that he regretted how much time he was away from his family owing to his demanding career. The fighter moved away from his hometown of Memphis when his little sister was only eight. He tells me that on a recent visit back to Tennessee, he realized all of his cousins had grown up and had kids—kids he hasn’t gotten to meet.

“If you’re gonna follow your dreams, make sure you’re okay with leaving your loved ones behind sometimes,” Jackson says, when I ask him what advice he would give to young wrestlers who are just starting out. “Me? My dreams brought me out to California, and I had to leave my hometown. Sometimes your dreams take you places, and there are consequences you won’t realize in the moment. I can’t really tell people, ‘oh don’t follow your dreams because you’re gonna leave your family behind.’ Just make sure and make time to still go and be with your family, because family is everything.”

On the physical toll

At age 40, Jackson’s reflections on his fighting career, including the toll it’s taken on his body, are thoughtful.

“You know, I’ve been doing sports since I was 17, so I got a lot of bumps and bruises along the way,” he tells me.

These days, Jackson works with cbdMD, a company that sells hemp-derived CBD oil products as a natural alternative to chronic pain— products that have helped him a great deal.

“Thank God for cbdMD,” he says. “The products have really changed my life. I’ve been complaining less in the gym. My coaches are happier with me, because now I’m performing better. They took a lot of pain away and some of my smaller injuries have healed up.”

It’s not just him—it’s also his dog that’s benefitted from cbdMD. “I didn’t even know they offered dog treats!” Jackson exclaims about his discovery. “I’ve got an older dog that had a bum leg, and CBD helped him out a lot. You know, he’s 12 years old. That’s 70-something in dog years—maybe even 80. So, he’s really old, and he’s doing a bit better now.”

Because today, social media is a large part of the work of being a celebrity, I’m curious if Jackson has any rules for himself in how he approaches it. Jackson has 500,000 Instagram followers and has managed to avoid controversy enough to stay out of the headlines. But he says no— he’s just himself online.

“I like to have fun with it. I try to be as sociable as I can. You know, it’s a fun tool to connect with fans that you would never see. Honestly, I don’t do anything different,” Jackson says.

Well… “The only thing,” Jackson says, “is that sometimes you get annoying people on social media, they just slide into your DMs and be like “sup?” I don’t know what to do with that.”

I ask him if he ever answers. “Hell no! I used to talk to a lot of fans in my DMs, until I found out that once you accept their DM, then they can DM anytime. They be out, living in your DMs. They just move right in—they’re like those friends that sleep on your couch for a few days, and next thing you know it’s been two years, and they’re eating all your leftovers in your refrigerator.”

What’s next for Rampage Jackson?

Rampage Jackson has two new movies coming out soon. A Psycho’s Path, due to be released in fall 2019, is about a sadistic killer roaming the streets of a sleepy desert town. This is his first time working on a horror film.

The other movie is an action film. Boss Level, with Rashad Evans, Mel Gibson and Ken Jeong, is about a retired special forces officer trapped in a never-ending time loop on the day of his death. It’s due to come out in summer 2019.

“They’ve got me looking funny in it though,” Jackson says. “I’m playing a German guy—that’s all I’m gonna say about that!”

This article was originally published in the Spring 2019 edition of College News.