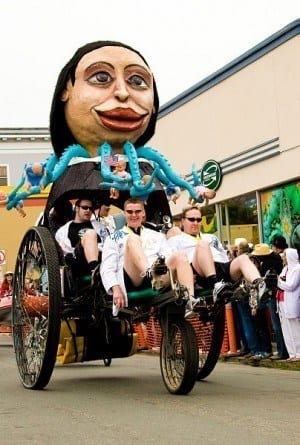 Octomom is stirring up controversy, again.

Octomom, lesser known as Nadya Suleman, has been under fire since a hairdresser, who had an in-home appointment with Octomom, saw that her 14 kids were living in squalor. She contacted the authorities, and the Orange County Social Services Agency launched an investigation on Tuesday.

The hairdresser took pictures of what she saw as disgusting conditions and released them to TMZ. The celebrity gossip site also has a picture of the check she received for a cut and a Brazilian blowout from Octomom …a $520 check.

Now the Octomom went on Good Morning America yesterday to claim that she and her kids were “set up.”

The hairdresser claimed Octomom locked her children in a room, using a chair to keep it locked while she was getting her hair done. The hairdresser also told authorities that the children were half-naked and that she was forcing them to use portable toilets outside.

“I think, maybe, me and my kids were set up,” Octomom said on Good Morning America. “We were set up.” She explained that her toilet was broken inside and that now it was fixed, but she doesn’t understand why the hairdresser was so upset by it. “She thought it was unacceptable that they’re half-naked going potty. I mean, mom is out there, come on.” She also explained that one of her older children had propped the chair under the door to keep the younger siblings from opening and closing it. As for the $520 haircut for a woman who collects about $2,000 in welfare each month, Octomom said it included cuts for all 14 of her children. “I am making money, though. I have jobs and I can afford it,” Octomom said.

On the other side, the hairdresser told TMZ that a plumber had been to the house and estimated it would cost $150 to fix the pipes, but that Octomom had declined, saying it was too expensive. And, as a columnist on WebProNews.com said, sure, she may be making extra money, but there are things like beauty school students who will cut hair for next to nothing. If she’s collecting $2,000 in welfare each month, is a Brazilian blowout really necessary? It’s called cutting corners, Octomom, use a straightener.