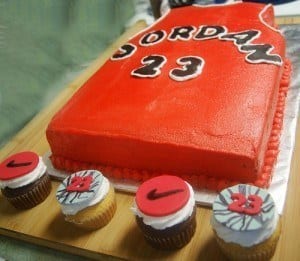 Michael Jordan and Yvette Prieto file for a marriage license. The wedding is set for April 27th.

Michael Jordan is making headlines again. But this time it’s not about bashing Lebron James, shooting holes with Tiger Woods, or his possible lovechild. He and his longtime fiancée, Yvette Prieto, filed for a marriage license on Thursday at the Palm Beach County courthouse.

Yvette Prieto, 32, and Michael Jordan, 50, have been dating for over a year. The two announced their engagement in December 2011. The license is valid until May, but it’s uncertain whether or not the two will have a ceremony by then. Some rumors hint toward the couple planning an April wedding (27th).

Much like his basketball career, it’ll be Michael Jordan’s second turn at marriage. He was previously wedded to Juanita Vanoy from 1989-2006. He has three children from his previous marriage.

Pamela Y. Smith, 48, says Michael Jordan is the father of her 16-year-old son who goes by the name of Taj Jordan (better known as Grant Pierce Jay Jordan Reynolds).

The 16-year-old made a video of himself confessing to be Michael Jordan’s secret son and fourth child. His mother, Smith, says she filed the suit at the request of her son who desperately wants his alleged father to be more involved in his life. Michael Jordan denies the allegation, which would also prove an affair during his first marriage according to bleacherreport.com.

“If you’ve been hearing any rumors about I’m Michael Jordan’s son on [various media], it’s true… He knows I’m his son. I met him. We talked. Follow me on Twitter,” is the jest of what Taj Jordan had to say in his December 2012 Youtube video.

Yvette Prieto has been dating the five-time MVP since 2008. The two have been reportedly living together in Kendall, Florida since 2009. The former business management student is said to have filed for Chapter 7 bankruptcy in 2002.

Perhaps the next line of Jordan’s will feature the logo-sized Jordan dunking a bedazzled veil. And hopefully, his second marriage won’t be like his time playing for the Wizards after retiring from the Chicago Bulls.