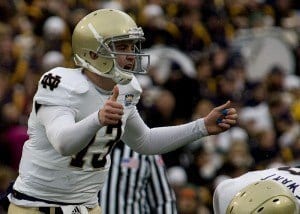 The QB has been arrested on preliminary felony charges, including battery to law enforcement

Notre Dame Quarterback Tommy Rees is from Lake Forest, Ill. He was being held without bond until the county prosecutor’s office decided on formal charges.

“The university is aware of this incident and is confident it will be handled in a prompt and professional manner through the criminal justice system,” Notre Dame Spokesman Dennis Brown said in a statement. “Internal discipline is handled privately, in accord with our own policies and federal law.”

Captain Phil Trent of the South Bend Police Department told the Chicago Tribune that as officers approached an off-campus house party on Notre Dame Avenue, just after midnight, five or six people hopped a fence and led police on a chase. The officers caught up with the group and used their hands to corral them, but Notre Dame Quarterback Tommy Rees “actively resisted.”

“It wasn’t terribly violent, but it was enough to be considered resisting,” Trent said.

Trent also said that one officer suffered a minor scrape and “had the wind knocked out of him” while trying to stop the group.

Notre Dame Linebacker Carlo Calabrese, 21, was also arrested but on a misdemeanor charge of disorderly conduct. He was released after posting $150 bond.

Notre Dame Quarterback Tommy Rees started 12 of 13 games with the Irish going 8-5 last season. He started four games as a freshman in the 2010 season and was among four players competing during Notre Dame’s spring practices for the starting quarterback spot this coming season.