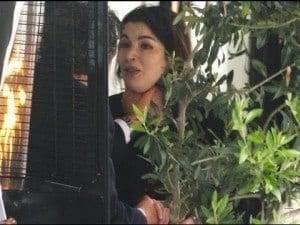 Charles Saatchi announces divorce to press before telling his wife.

Nigella Lawson is getting a divorce. In remaining constant with his jackass-persona, Charles Saatchi announced that he would be divorcing Nigella Lawson, as he was disappointed that she did not release a statement condoning the fact that he publicly choked her (go figure).

Nigella Lawson is a celebrity chef and Charles Saatchi is one of the most prominent art dealers in the world. Nigella Lawson and Saatchi married in 2003, but in the past few years their marriage has become tabloid fodder documenting Saatchi’s boorish behavior. The final straw came when photographs of Saatchi choking Nigella Lawson on a restaurant patio were published last month.

At the time, Saatchi claimed that the incident was “a playful tiff” despite the fact that Nigella Lawson looks terrified and was left alone on the patio crying. Shortly after the story broke, Nigella Lawson and her two children moved out of the house she shared with her husband. Saatchi was issued a citation (which is tantamount to a slap on the wrist, with one legal insider noting that a citation is the same punishment a teenager caught skateboarding in a restricted area would receive).

On Sunday, Charles Saatchi released a statement announcing his intention to divorce Nigella Lawson, telling the press, “I feel that I have clearly been a disappointment to Nigella during the last year or so, and I am disappointed that she was advised to make no public comment to explain that I abhor violence of any kind against women, and have never abused her physically in any way.”

Even more upsetting, insiders have confirmed that Nigella Lawson was not aware of Saatchi’s intent to begin divorce proceedings and only found out when he released the public statement to the press. Nigella Lawson has yet to issue a statement and her lawyer declined to comment.

Either way, it seems like Nigella Lawson will be just fine. She is independently wealthy, has two beautiful children and a very successful career. She most certainly doesn’t need an abusive husband who retaliates by initiating divorce proceedings when someone doesn’t justify his churlish actions.