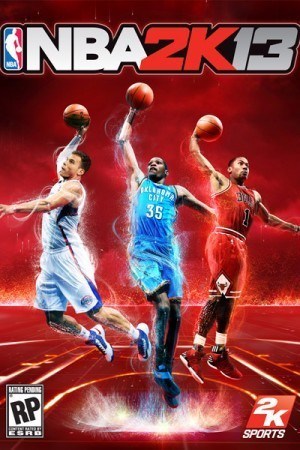 It must be a daunting task to release an annual sports game, especially when the previous year is arguably one of the best sports titles to ever have been released. 2K Sports, the team behind the NBA 2K series faced this task when approaching NBA 2K13, this year’s installment of the basketball franchise. Thankfully, enough has been done to make this feel like a new game, but surprisingly there are still some areas that need improvements. Still, with the new MyTEAM mode coupled with the returning MyCAREER mode, is it enough to warrant an entirely new purchase? The answer is a resounding ‘yes’.

If you come into the game expecting a massive overhaul to the engine and some sparkling new graphics, you’ll be grossly disappointed. The team at 2K Sports hasn’t done much to improve their visuals since last year and that may drive some players away. Without jumping in and feeling the differences in gameplay it may end up being a ‘judged a book by its own cover’ situation. Players are still digital doppelgangers of their real-life counterparts and the inclusion of past NBA stars and even pop-culture icons like Justin Bieber make their appearance with striking accuracy.

While the typical game modes of Franchise, Play Now, and MyCAREER make a comeback, new additions are included to give players another taste of what the franchise has to offer. Blacktop mode goes to the street courts and allows players to create 1 on 1, 2 on 2, all the way up to full-team game with a ‘Rucker Park-like’ motif. The biggest disappointment is the lack of vocal fans standing on the sidelines to trash talk your awful play.

MyTEAM is also new and adds a brand new element to the NBA 2K franchise, albeit with a micro transaction undertone. Clearly the success of the Ultimate Team Mode in game series like Fifa and NHL by rival EA has struck a chord here. Players can spend the new ‘Virtual Currency’ (VC), earned during every aspect of gameplay, on purchasing packs of cards. These cards may hold an NBA player, a skill enhancement, coach, arena, or even alternate team uniforms. You then assemble a team from players unlocked and take your team against others online with the intent of the ‘best man (or woman) winning’.  Unfortunately that’s not always the case; as expected, players will have to invest a massive amount of time in order to create a successful team, but those willing to spend some money can leapfrog others and simply buy their stars. It creates an odd mix of players who throw ‘scrubs’ against those who’ve bought Lebron James, Kobe Bryant, and others that will simply manhandle their competition.

MyCAREER returns, but this time players will find that the competition is far inferior to years past. Instead of a painful learning curve, you’ll find that open shots rarely miss — even from long, long range. Some defensive players tend to play soft, standing four or five feet from your player even when he has the ball. For shooters on the perimeter, this means an easy bucket, VC, and teammate grade. Strangely though, as your in-game grade increases, players will find it far more difficult to reach that coveted A+ status. Good passes, shots, and team play will quickly take you from an average grade to a B or B+ with minimal effort. From there though, mistakes that could be shrugged off will have massive consequence and cost you large chunks of your grade, quickly dropping you if you make two or three bad plays consecutively.

A surprising twist to MyCAREER this year is the integration of Social Media. A Twitter-like timeline appears after each game and your character can earn followers. Current players, NBA greats, even celebrities will chime in as you grow in popularity. Additionally, if your play doesn’t meet expectations you can expect to hear it from the fans — it’s like real life! Even during games when you drop 40 points and five rebounds, if you’re not getting the assists that some people expect, they’ll let you know it. Additionally, a sort of role-playing enhancement has been added, allowing players to purchase Signature Skills and custom equipment that provide additional bonuses during particular situations. You may play mediocre for three quarters, but at the end of games your player could specialize for a Robert Horry-like focus to deliver clutch shots at perfect moments.

The most impressive upgrade from last year is the integration of Kinect — yes really. Shouting phrases at your television will cause your teammates to perform the actions required. Short commands like, “double team!” will cause the AI to trap opponents, but also runs the risk of leaving someone open. Additionally if your point guard is handling the ball too much, uttering “Pass me the ball” will cause him to look your way and dish the rock. The defining moment of Kinect integration came during a MyCAREER game early in my career. Playing for the Houston Rockets in only my second game, Josh Smith (SG) had single-handedly brought the team back with four consecutive three-pointers, but still trailed 80-82 with 33 seconds remaining. Receiving the inbound pass, I attempted to pass up the floor to an open teammate, only to have my errant pass intercepted. A loud expletive escaped my lips and immediately the “SCREE!” of whistle stopped play. Technical foul. Obscene language. We lost the game. Ingenuity like that, despite the blemish on my record, is what has kept this franchise at the forefront of sports titles.

The biggest area of concern across the entirety of the game is defense. Players can time when to go for a big move, stealing or blocking another player, but when in a basic man-to-man defense it’s nearly impossible to guard a slashing player like Kobe Bryant or Kevin Durant. Instead, stiff controls limit lateral movement and put players in a position of fouling or simply unable to fluidly stay with the player, allowing for easy lay-ups or a (more infuriating) dunk. To try and combat that you can play off of your man a bit, but even average players will notice — a testament to the brilliant AI — and square up for a jump shot right in your face.

It’s nice that the team from 2K Sports hasn’t rested on their laurels, considering they haven’t had competition against this title in over two years. Instead, they’ve focused on evolving the franchise with sparkling gameplay, additional game modes, and more focus on customization for each player. Online games are smooth, despite opponents who quit when it becomes clear they won’t win, but that’s not the fault of developers. Arguably one of the best gaming soundtracks ever was pieced together by Executive Produce Jay-Z — yes, that Jay-Z. Throwback teams, including the ‘92 Dream Team, make an appearance along with celebrities to add a touch of flavor to a genre that you’d think would be tired and old by now. Fortunately, despite the lack of new visuals or gameplay engine, NBA 2K13 feels like a new experience and will delight players old and new.