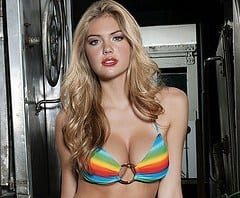 A video appeared on Youtube last week in which high school senior Jake Davidson asked Kate Upton to his senior prom. Kate Upton, to the surprise of everyone involved, responded to the video.

In fact, Kate Upton has tentatively accepted an invitation to go to prom with the high school boy—but she has to look at her schedule first, of course.

Here is a snippet from Davidson’s pitch from the original video:

Upton originally tweeted at Davidson with the message: “you can call me Katie if you want…how could I turn down that video! I’ll check my schedule ”

The plot thickened on Wednesday, when Davidson appeared on the TODAY show to talk about the proposal. At one point in the segment, Kate Upton surprised the boy by calling into the show—and Davidson was, understandably, shell-shocked. The conversation went like this:

Kate Upton: Jake how do you feel? I can’t believe you’re on a show and everything now! This is so amazing.

Jake Davidson: This just got so much better now that you’re on the phone.

Kate Upton: I really love the video. it was so hilarious and so creative. Thank you so much for doing that, i really appreciate it.

Jake Davidson: Kate, I’m telling you it could be a great night, a great evening. I could even get the curfew extended from my parents maybe. We could go to a great dinner before, I hope you’d be interested, if your schedule’s free. And what time can I pick you up if you’re interested?

Kate Upton: Well I’d definitely have to just check my schedule and if everything works out, I’d love to go with you. I know we’d have a blast.

Entertainment Tonight contacted Kate Upton later that day, but she still had yet to check her schedule. But if she’s free, she seems to be open to the idea of going to prom with him—and getting Upton to even consider a date should be a victory in itself.