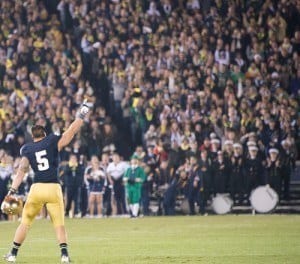 Was the Notre Dame linebacker the victim of a scam or the seeker of publicity?

Manti Te’o, famed Notre Dame linebacker, received a plethora of media attention recently for his tragic plight involving girlfriend Lennay Kekua. Kekua was diagnosed with leukemia after surviving a life-threatening car crash in early 2012 and eventually died in the hospital last September, according to Te’o and most major news outlets. However, as Te’o and the nation found out Wednesday, Kekua was never in a car accident, never had leukemia, never died and never even existed.

The story of Te’o and Kekua’s relationship was covered heavily by the South Bend Tribune, ESPN, Sports Illustrated, the New York Times, the New York Post, CBS, the Los Angeles Times, etc. It took the investigation of reporters Timothy Burke and Jack Dickey at deadspin.com to discover the hoax and break the story. They attempted to find records of Kekua’s time at Standford, the school she supposedly attended, her car crash, her death and her birth. No concrete records of her existence were found.

So what really happened?

As deadspin.com reported, Te’o and Kekua never actually met in real life, and their entire relationship was based on social media conversations, texts and phone calls. Te’o’s family knew about the relationship and believed Kekua would be the one to marry Te’o. According to deadspin.com, the two originally met on Twitter, and the pictures used representing Kekua were actually of another girl, who spoke with deadspin.com reporters but who requested to remain anonymous.

The anonymous girl’s suspicions lead her to believe a former classmate named Ronaiah Tuiasosopo, who maintained a friendship with Te’o, was behind the hoax, considering he supposedly previously contacted her requesting her, in a convoluted way, to take a picture with a sign depicting “MSMK,” the latter part of Kekua’s Twitter account, @LoveMSMK.

The anonymous girl took the picture and sent it to Tuiasosopo, and it later appeared in the background of @LoveMSMK’s Twitter page.

So, was Te’o in on the hoax, looking to use the fictitious tragedy as a publicity stunt, or was he simply the victim of a scam? Answers remain unclear to sports journalists and Notre Dame alike, at the moment, as more statements are given to journalists by former teammates, friends and family members either defending Te’o or condemning him.

Reporters continue to investigate evidence of Te’o speaking about his girlfriend to news outlets after Dec. 6, the date Te’o and Notre Dame officials report they originally found out about the hoax. In a Dec. 8 interview with ESPN, Te’o speaks about how his coaches offered him moral support after he learned of Kekua’s death.