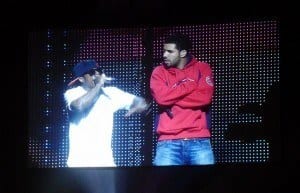 The two leading faces of the Young Money dynasty have been hard at work. The latest product is the single “Grindin,” which is going to be featured on his upcoming album Tha Carter V.

The album has been repeatedly pushed back and there is no solid release date at the moment. However, with “Grindin” and other lead single and huge radio hit “Believe Me,” the album has substantial hype toward what many think will be a fall release.

Lil Wayne announced that this will be his last studio album for a while before focusing on other interests and raising his kids. Since 2011 he has been planning on retiring at age 35. He is currently 31.

As for Drake, his last full-length album Nothing Was The Same is almost a year old. He recently released the titled of his next album, which is going to be called Views from the 6. Besides that he has been featured on a number of tracks and has managed to stay relevant with guest appearances and other endeavors including hosting the ESPYS and managing his own label OVO Sound.